Throughout the month of April, Sexual Assault Awareness Month, data from the 2015 Alaska Victimization Survey (AVS) has been used to remind Alaskans of the need to "break the cycle of violence" in our state. The Alaska Department of Public Safety called Alaska rates of sexual assault "concerning," citing AVS data showing that 40% of Alaska women have experienced intimate partner violence during their lifetime, and 33% have experienced sexual violence during their lives. From Dillingham, to Seward, to the Mat-Su, communities are using AVS data to remind Alaskans of the need to "Choose Respect" and "do better," not just in April, but year round.

"The Rolling Stone Guide to Legal Pot: Alaska," by Zacharia Hughes, part of a state-by-state guide to marijuana legalization, provides an overview of the unique challenges that have come with legalization and commercialization of marijuana in Alaska. The article cites Justice Center faculty Jason Brandeis' 2012 Alaska Law Review article on Ravin v. State, to provide the background on Alaska's marijuana history, in particular the personal-use marijuana law based on Alaska's Constitutional right to privacy.

Prof. Brandeis teaches courses on the American legal system, constitutional law, and civil liberties, and is a frequent speaker on constitutional law and other legal topics.  Prof. Brandeis also maintains a private law practice through which he advises clients on marijuana law and policy questions.  He has also provided legal services to the Campaign to Regulate Marijuana Like Alcohol in Alaska.
Posted by Pamela Cravez at 4/30/2018 03:56:00 PM

On April 17, Maude Blair, legal counsel with the Southcentral Foundation, spoke to Prof. Ryan Fortson’s Tribal Courts and Alaska Native Rights (JUST/LEGL485) course about Alaska Native governmental organizations. In addition to her current work, Ms. Blair is a past Vice President of the Alaska Federation of Natives and has been legal counsel to the NANA Development Corp. Ms. Blair is originally from Kiana.
Posted by Pamela Cravez at 4/24/2018 12:33:00 PM

The 2018 Alaska High School Mock Trial Competition, organized by Prof. Ryan Fortson, Justice Center faculty, in conjunction with the Young Lawyers Section of the Anchorage Bar Association, was held on April 6-7 in the Boney Courthouse in Anchorage. Seven teams of six to nine students each from around Alaska competed in multiple rounds of simulated trials. Students played the roles of both attorneys and witnesses and were evaluated by panels of local attorneys. In the final round — held in the Alaska Supreme Courtroom before Justice Joel Bolger, Judge David Mannheimer, and Judge Kevin Saxby — a team from Sitka High School prevailed over a team from West Anchorage High School. Prof. Fortson is a member and past president of the Board of Directors of the Anchorage Bar Association. If you are interested in forming or coaching a mock trial team next year, please contact him at hrfortson@alaska.edu.
Posted by Pamela Cravez at 4/23/2018 01:17:00 PM

The Sequential Intercept Model offers conceptual points at which a person with serious mental illness could be diverted from the criminal justice system and into community-based treatment. A recent book that looks at the success of programs along the intercept continuum is reviewed in the spring 2018 edition of the Alaska Justice Forum. In May, the Department of Corrections is sponsoring a two-day workshop presented by Policy Research Associates and the SAMHSA GAINS Center for Behavioral Health and Justice Transformation on the model and its reentry application.
Posted by Pamela Cravez at 4/23/2018 09:11:00 AM

“Entities like UAA’s Institute of Social and Economic Research and the Alaska Justice Information Center have been resources for my administration," Alaska Governor Bill Walker said. "We continue to look for ways to use the talent at the university to build a safer, stronger and smarter Alaska.” Gov. Walker's comments appear in the latest issue of Alumni Spirit and show how the Alaska Justice Information Center (AJiC), as well as other research entities at the university, are an important resource for Alaska's policy and decision makers.

The Council on Domestic Violence and Sexual Assault (CDVSA) highlighted its "productive and collaborative" relationship with the UAA Justice Center  in its 2017 Annual Report released this week. According to the annual report, the Justice Center which began collaborating with CDVSA in 2010, is providing critically important insight and valuable understanding of the scope of domestic violence and sexual assault through its work on the 2010 and 2015 Alaska Victimization Surveys (AVS) and a Knowledge, Attitudes and Beliefs survey. "In 2017, two years following the last statewide AVS, we are still gaining significant and critical information about the impact of these issues—particularly for Alaska women," according to the CDVSA's 2017 annual report. "In FY17, two follow-up reports were developed and released based on results from the 2015 AVS: the Statewide and Municipality of Anchorage Stalking Victimization (released in January 2017) and the Statewide Victimization of Alaska Women age 60+ (released in June 2017)."

The Justice Center continues to collaborate with CDVSA with the joint release of results from the 2014-2015 AVS for Aleutian/Pribilof Island region released on March 13, 2018. 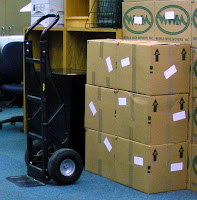 The Justice Center will be temporarily relocating over Summer 2018 due to renovations at the UAA/APU Consortium Library. We will be open as usual— 8:00 a.m. to 5:00 p.m — for the summer session at our summer location at University Center, 130. The University Center is located at 3901 Old Seward Highway (see map below).

In the meantime, the Justice Center is a bit cluttered and messy, with packing boxes scattered about. Please don't let our mess dissuade you from stopping by  if you need to visit with faculty or staff. We are operating as usual, and are here to help in any way we can. Thanks for your patience and understanding while we work our way through this transition.

A recent article in the New York Times about high rates of car theft and growing property crime in Alaska referenced an article by Sharon Chamard, Justice faculty, regarding gun ownership in Anchorage and Mat-Su Borough. In "Car Stolen in Alaska? It Could Be Your Neighbor Chasing the Thief," author Kirk Johnson discusses the rise of civilian crime fighters in Anchorage responding to car thefts. Johnson refers to Chamard's article that reports surveys showing firearm ownership in Mat-Su Borough among adult heads of household at 71.4 percent and in Anchorage at 52.6 percent to support the "assumption that most Alaskans are armed" and posits that this "may be keeping crime from getting worse." However, Anchorage Police Chief Justin Doll countered that while there are good intentions behind citizen involvement, "it's really dangerous." Citizens should be an active voice for public safety, Doll says in the article, "But when crime actually happens let us deal with it."
Posted by Pamela Cravez at 4/16/2018 01:52:00 PM 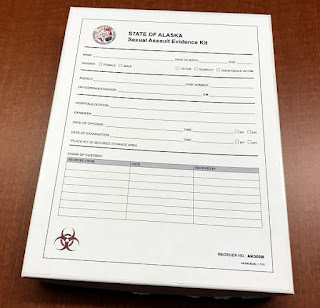 Victim-centered policies being developed by the Alaska Department of Public Safety (DPS) for processing unsubmitted and untested sexual assault kits collected by Alaska State Troopers are one part of the state’s efforts to tackle more than 3,000 untested kits. DPS received Sexual Assault Kit Initiative (SAKI) grants in 2016 and 2017 to address SAK's collected by Alaska State Troopers. Since DPS began work, the Alaska State Legislature passed SB55, a bill requiring a statewide SAK inventory, a plan to address untested kits statewide and a plan to prevent a future backlog. Read about progress being made on SAKI by DPS and how it could impact the more than 3,000 untested kits in Alaska in the spring 2018 Alaska Justice Forum.
Posted by Pamela Cravez at 4/16/2018 09:10:00 AM 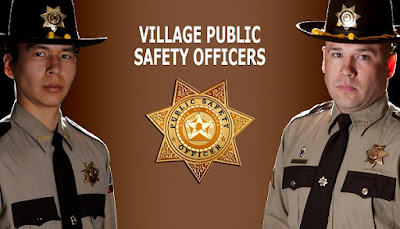 The likelihood that a sexual assault or sexual assault of a minor case will be accepted for prosecution in western Alaska is enhanced when VPSOs are first responders according to a new study.  The study, by Justice Center Director Brad Myrstol, examines the impact of VPSO involvement in sexual assault and sexual assault of a  minor cases at two decision points in the progress of a case toward prosecution:
Read about this study in the spring edition of the Alaska Justice Forum.
Posted by Pamela Cravez at 4/09/2018 09:09:00 AM

Alpha Phi Sigma recognizes academic excellence of undergraduate and graduate students of criminal justice as well as juris doctorate students. Alpha Phi Sigma is the only Criminal Justice Honor Society which is a certified member of the Association of College Honor Societies and affiliated with the Academy of Criminal Justice Sciences.
Posted by UAA Justice Center at 4/06/2018 03:18:00 PM 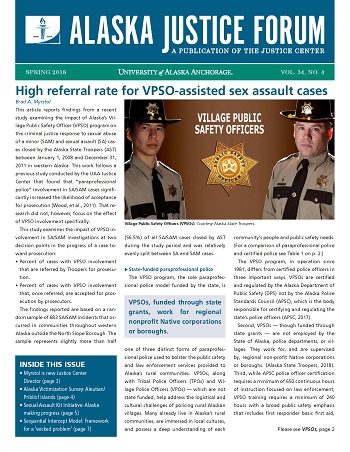 The 2018 spring edition of the Alaska Justice Forum includes articles dealing with Alaska’s high incidence of sexual violence including how VPSO-assistance in sex assault cases in western Alaska have high referral rates for prosecution.  An overview of results from the 2014–2015 Alaska Victimization Survey for the Aleutian/Pribilof Islands shows that 45% of adult women in the region have experienced intimate partner violence, sexual violence or both in their lifetime. In addition, an article on Alaska’s Sexual Assault Kit Initiative provides an update on progress addressing unsubmitted and untested sexual assault kits collected by Alaska State Troopers and development of victim-centered policies by a group of statewide stakeholders.

The Justice Center recently developed a report for the Alaska Department of Public Safety showing that troopers in the Mat-Su Borough and part of the Valdez Cordova census area are chronically over-used, causing operational problems. The report is included in the spring Forum along with a book review that describes the Sequential Intercept Model. The model provides a framework for diverting a person with serious mental illness from the criminal justice system into community-based treatment.