Prof. Jason Brandeis, Legal Studies faculty,  provided a perspective on Alaska marijuana law and regulations at the Cannabis Law Institute in Denver, Colorado, July 28-29.  Presented by the National Cannabis Bar Association and the University of Denver Sturm College of Law, the two-day event focused on legal issues facing attorneys and businesses in the cannabis industry. Prof. Brandeis was invited to participate in a panel discussion of the laws and regulatory systems of the western states. He gave an overview of Alaska's regulatory and licensing framework and the unique challenges and controversies the industry faces in Alaska.

Prof. Brandeis teaches courses on the American legal system, constitutional law, and civil liberties, and is a frequent speaker on constitutional law and other legal topics.  Prof. Brandeis also maintains a private law practice through which he advises clients on marijuana law and policy questions.  He has also provided legal services to the Campaign to Regulate Marijuana Like Alcohol in Alaska
Posted by Pamela Cravez at 7/31/2017 11:00:00 AM

Kelsey Waldorf, B.A. Justice 2013, graduated from University of Colorado Law School in May 2017. Tomorrow she takes the Colorado bar exam and then she'll do some traveling before beginning a fellowship in September.

Kelsey entered law school well-prepared by her education at UAA. While working toward her B.A. in Justice, she was in the University Honors College, a Forty-Ninth State Fellow, and traveled the world as a competitive debater in the Seawolf Debate program. In addition to Justice coursework, she worked as a student researcher on a project with the Alaska State Troopers and Anchorage Police Department. In 2013, Kelsey delivered the student speech at commencement.

This September, Kelsey will begin a year-long fellowship as a deputy district attorney in a rural town in southern Colorado. The purpose of the fellowship is to encourage recent graduates to work in rural areas which have trouble drawing legal professionals because of low pay and under staffing. During her fellowship she will most likely specialize in sexual assault cases, she wrote in an email.

After her fellowship, Kelsey plans to return to the metro area in Colorado and work as a deputy district attorney for a year or two before applying to become an FBI agent — a goal she's long held.
Posted by Pamela Cravez at 7/24/2017 12:52:00 PM

The goal of the program is to provide students with skills that will help them better advocate for themselves and others and be a force for the change they want to see in the world.
Posted by Pamela Cravez at 7/20/2017 04:18:00 PM

The Alaska Justice Forum is returning to quarterly publication. To make this possible, the Forum is limiting mailed delivery of the print edition and enhancing its web presence with expanded and updated print edition stories as well as articles and content exclusive to the web. Sign up to get delivery of the Alaska Justice Forum.
Posted by Pamela Cravez at 7/17/2017 05:07:00 PM

Dr. André Rosay, Justice Center director since 2007, has been appointed associate dean for academic and student affairs in the College of Health. Dr. Rosay bids farewell to the Justice Center here.

Dr. Myrstol received his Ph.D in Criminal Justice from Indiana University in 2006. He has served as the principal or co-principal investigator on a variety of Alaska justice topics including the offending trajectories of juveniles, the criminal case processing of domestic violence, sexual assault and sexual abuse of a minor cases, the role and impact of Alaska’s Village Public Safety Officer (VPSO) program on the state’s response to domestic violence and sexual assault, sex offender recidivism trajectories, sexual violence victimization among university students, the structure and organization of policing in Alaska, as well as factors impacting charging, time-to-disposition, and sentencing outcomes in felony cases.

Dr. Myrstol is currently the principal investigator on Alaska's Results First Initiative, a partnership with the Pew-MacArthur Trust that provides analysis of evidence-based programs giving policymakers  a tool to better understand the relationship between the state’s monetary investment in programs and the return on that investment in terms of the benefits of reduced recidivism. 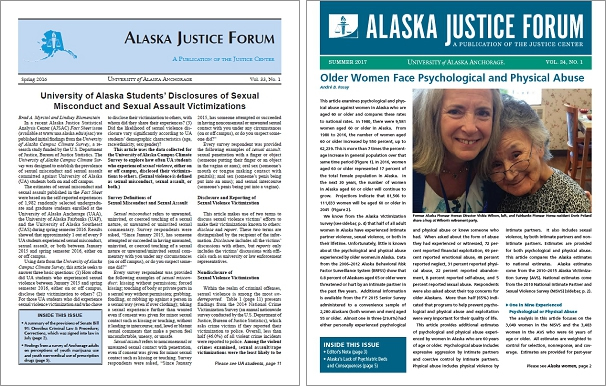 The Alaska Justice Forum, a publication of the Justice Center at UAA, has a new look and new web presence. We are phasing out hard copies and moving toward online delivery with more articles and updated stories. The Summer 2017 edition is coming soon. Sign up here.
Posted by Pamela Cravez at 7/12/2017 08:43:00 AM

Pamela Cravez, Alaska Justice Forum editor and Justice Center research associate, was elected secretary of the NAMI (National Allliance on Mental Illness) Anchorage board at the annual membership meeting in May. Cravez has served on the NAMI Anchorage board since 2016. NAMI Anchorage, one of four NAMI Alaska affiliates, provides education and support for families and individuals experiencing mental illness. Juneau, Fairbanks, and Barrow also have NAMI Alaska affiliates.
Posted by Pamela Cravez at 7/11/2017 01:38:00 PM

The July issue of Senior Voice features  research conducted by Dr. Andre Rosay, Justice Center director, on the prevalence of psychological and physical abuse among Alaskan women aged 60 and older.  According to Dr. Rosay's research, one in nine Alaska women aged 60 and older experienced psychological or physical abuse in the past year.  Results are based upon the Alaska Victimization Survey (AVS), an annual survey conducted from 2010 through 2015 by the Justice Center and funded by the Alaska Council on Domestic Violence and Sexual Assault. Dr. Rosay is the principal investigator for the survey.

A more comprehensive article on Dr. Rosay's research appears in the Summer edition of the Alaska Justice Forum, published later this month. Sign up to receive the summer edition of the Forum at http://eepurl.com/cDlViD.
Posted by Pamela Cravez at 7/06/2017 09:40:00 AM