Alaska is one of more than 30 jurisdictions throughout the country partnering with the Pew-MacArthur Results First Initiative to use innovative research tools to analyze the benefit to cost ratio of evidence-based programs to reduce recidivism.  Representatives from Pew-MacArthur Results First were in Anchorage this week for the presentations. They discussed the importance of this work with the Commission and Working Group. 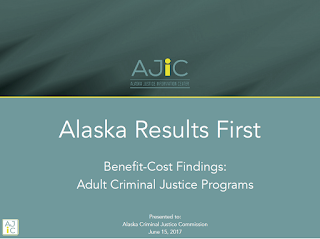 The Results First analysis of evidence-based programs provides policymakers with a tool to better understand the relationship between the state’s monetary investment in programs and the return on that investment in terms of the benefits of reduced recidivism.

Dr. André Rosay, Justice Center director, presents findings from the Alaska Victimization Survey, funded by the Council on Domestic Violence and Sexual Assault (CDVSA), with L. Diane Casto, CDVSA executive director. Results show that 11.5% or 1 in 9 Alaskan women aged 60 and older experienced psychological or physical abuse in the past year.

Casto calls the number of women experiencing abuse unacceptable. The CDVSA will use data from Justice Center research to inform future work on elder abuse. Women who are experiencing abuse are urged to contact CDVSA, (907) 465-4356, for resources and information.

A detailed article on Dr. Rosay’s findings will be in the summer 2017 edition of the Alaska Justice Forum. 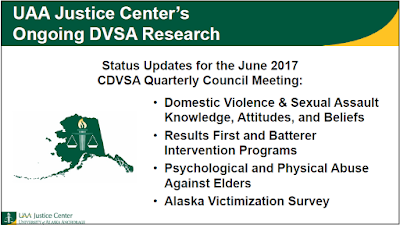 "Having a group like the Justice Center provides a huge opportunity to move us forward," said CDVSA Executive Director L. Diane Casto in response to Justice Center faculty reports on research.

Justice faculty provided a Powerpoint with status updates that included: 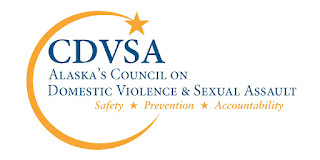 • Survey on Alaskans’ Knowledge, Attitudes and Beliefs (KAB) regarding Domestic Violence & Sexual Assault
• Results First Initiative cost-benefit analysis of batterer intervention programs which will be formally presented to the Alaska Criminal Justice Commission on June 15
• Update on psychological and physical abuse against women 60 and older from the Alaska Victimization Survey (2010-2015) (AVS) and comparison to national data from the National Intimate Partner and Sexual Violence Survey (2010).
• Update on the AVS and release of additional results in the coming months including in the Alaska Justice Forum in July.


Casto and the Council will be recommending additional areas for Justice Center study to help focus future CDVSA efforts.
Posted by Pamela Cravez at 6/14/2017 03:22:00 PM

Dr. André Rosay, Justice Center director, and L. Diane Casto, executive director of the Alaska Council on Domestic Violence and Sexual Assault (CDVSA), discussed domestic violence and sexual assault in Alaska on Line One: Your Health Connection on Alaska Public Media on Monday, June 5. Using information from the 2015 Alaska Victimization Survey, Dr. Rosay reported that half of all women in Alaska have experienced intimate partner violence and/or sexual violence. He pointed out that the prevalence of intimate partner violence and sexual violence decreased by more than 30% since 2010. Unfortunately, the numbers remain unacceptably high.  In addition, they are high everywhere in Alaska.  But as Diane Casto said, women in rural Alaska face the additional challenge of having few services available for support.

As the new CDVSA executive director, Casto plans to continue to work with UAA's Justice Center to develop data-informed interventions. It is important to determine which interventions are working, Casto said. She added that programs aimed at prevention are extremely important.  In the long run, it costs much less to prevent abuse than to intervene once it is occurring, she added.

Victoria Goss, a 2017 Justice graduate, is doing crime analysis work with the Anchorage Police Department (APD). Sevy Sheppard, a Justice and Sociology double major, is working with APD as part of the Mayor's Americorps Program (MAP).  Both are leveraging skills they learned in Justice Prof. Troy Payne's Crime Analysis and Mapping course, JUST A432.

Goss attributes her contract-hire in APD's crime analysis unit to both Dr. Payne's course and an internship he organized for her in crime analysis last summer. Through his contacts at APD she was able to get the experience  that led to her being hired after graduation. Police sergeants, community council members and homeowners are among those who contact Goss with requests for crime data analysis.

Sheppard snagged one of two positions created by the new Mayor's Americorps Program at APD. She beat out 20 other applicants and is now working with fellow UAA student Demry Mebane on a research project going door-to-door surveying residents of Fairview, Mountain View and Spenard on neighborhood safety and perceptions toward APD. Sheppard and Mebane worked together to create the 25-question survey to get a better idea of the safety needs of the neighborhoods and individual residents.

"We hope to provide the Anchorage Police Department with the data they need to bridge the gap between police officers and these specific communities," Sheppard wrote in an email. "We only have until mid-August, so we are working hard to provide beneficial results!" she added.

The work Victoria and Sevy are doing will have tangible community impacts, according to Dr. Payne. "They're making the world better because the Justice Center provided the skills and connections, and the students provided smarts and drive."
Posted by Pamela Cravez at 6/05/2017 01:59:00 PM