Statistics from the Justice Center's Alaska Victimization Survey (AVS) were used throughout January, which is also National Stalking Awareness Month, to educate Alaskans about the need to make Alaska a safer place for women.  News outlets cited Justice Center research showing high rates of domestic violence - including that more than one in nine Alaskan women have experienced physical or psychological abuse in the last year -- and that one in four Anchorage women reported that they'd been stalked at some point in their lives. The Fairbanks Daily News Miner also highlighted a 2007 Justice Center report in partnership with Alaska State Troopers that documented high rates of sexual assault in the state.

Justice Center research in the news:

A report from the Alaska Justice Information Center (AJiC) at the Justice Center shows that most of Alaska's evidence-based adult criminal justice programs are showing positive return on state investment of money. AJiC's Alaska Results First analysis shows the monetary return on the state’s investment in evidence-based criminal justice programs, provides tools for assessing how changing the cost structure and delivery method can impact the return on current programs, and helps estimate the benefit to cost ratio for prospective programs. Read more about this new tool for analyzing the benefit to cost of programs in the Winter 2018 Alaska Justice Forum.
Posted by Pamela Cravez at 1/30/2018 08:38:00 AM

Robert "Rob" Henderson, B.A. Justice 1998, J.D. 2001, never intended to go to law school until UAA Justice Professor Lisa Rieger pushed him in that direction. "I owe a lot to Lisa," Henderson says. "But for her I would not have gone to law school."

Born and raised in Southcentral Alaska, Henderson's father is a retired colonel in the Alaska State Troopers. Henderson worked full time while attending UAA and graduated in 1998 with a B.A. in Justice and minor in Psychology.

Henderson not only credits Prof. Rieger with steering him toward law school, he also found that "the way she taught her classes [left him] very prepared for law school."

Her classes - including criminal procedure and substantive criminal law - "were a bear, but very similar to the style of learning practiced in law school,"  he added. (Rieger left the Justice Center in 2003 and is now Chief Legal Officer for Cook Inlet Trial Council)

Henderson attended the University of Montana Law School and served as an editor on the law review. Graduating in 2001, he returned to Alaska and clerked for Court of Appeals Judge Robert Coates. Following his clerkship, he went into private practice doing commercial litigation with Jermain, Dunnagan & Owens from 2002-2005. Private practice, though, did not appeal to Henderson.

"I felt I needed to focus on making our community a better and safer place," he said.

In 2005, he joined the Anchorage District Attorney's office  and in 2010 became a supervisor in Violent Crimes. In January 2013, he became Chief Assistant Attorney General in the Office of Special Prosecutions and Appeals.

Last  March,  Henderson became Deputy Attorney General for the Criminal Division. It's an administrative job that makes him part of a team working on large policy decisions. Though he misses the hands on of prosecuting crimes and trial work, the new opportunities of his position are very rewarding.
Posted by Pamela Cravez at 1/29/2018 10:13:00 AM

January 1, Alaska courts began using a pretrial risk assessment tool to assist in bail decisions. The goal is to improve public safety by reducing the number of defendants who fail to appear for trial or commit a new crime while out on bail. Geri Fox, Director of the Alaska Department of Corrections’ Pretrial Enforcement Division, speaks with Alaska Justice Forum Editor Pamela Cravez about the advantages and limitations of Alaska’s new pretrial risk assessment tool.  See the video 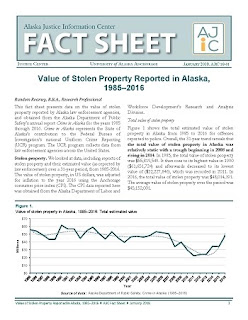 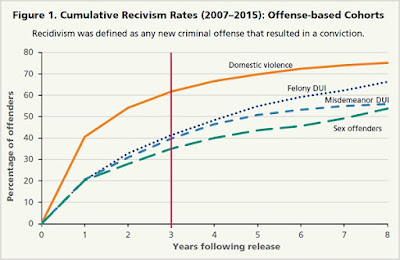 Araceli Valle, research professional with the Alaska Justice Information Center (AJiC) at the UAA Justice Center, writes about a new eight-year recidivism study in the Winter 2018 Alaska Justice Forum. As part of its Alaska Results First analysis, AJiC followed offenders for eight years after they’d been released from an Alaska Department of Corrections facility, expanding our understanding of recidivism patterns for a large group of offenders well beyond any prior study.
Posted by Pamela Cravez at 1/18/2018 12:48:00 PM

Ben Ervin, B.A. Political Science and Communication, has joined the Alaska Justice Information Center (AJiC) in UAA's Justice Center as a research professional. Ervin recevied the Kenneth Olenik Social Science Award at Aurora University in Chicago, where he graduated in 2017. A Colorado native, Ervin also received his Wilderness First Responder certification in 2017. When he isn't working on AJiC projects, he plans to be outdoors skiing, backpacking, climbing and working on trail crews.
Posted by Pamela Cravez at 1/17/2018 12:40:00 PM 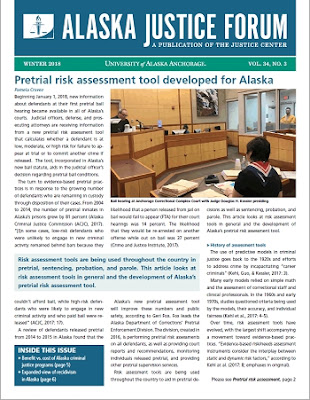 The 2018 Winter edition of the Alaska Justice Forum looks at  evidence-based practices in Alaska’s criminal justice system including the development of a new pretrial risk assessment tool and benefit to cost analysis of adult criminal justice programs.

Also in the Winter 2018 edition you’ll find the most recent AJiC Fact Sheet presenting data on motor vehicle theft arrests reported in Alaska from 1986 to 2016.

Articles in the 2018 Winter edition include:
Subscribe to the Alaska Justice Forum and receive it quarterly.

Valle and her co-authors recommend explicit and rich vocabulary instruction as a means to fostering vocabulary knowledge in low socio-economic status (SES) Spanish elementary third graders.  The researchers developed and applied two rich oral vocabulary training programs (definition and context), based on literature about vocabulary instruction for English-speaking children, to a sample of 100 Spanish elementary school third-graders recruited from areas of predominantly low SES. Compared to an alternative read-aloud method which served as the control, both explicit methods were more effective in teaching word meanings when assessed immediately after the intervention. Five months later, though, only the definition group continued to demonstrate significant vocabulary knowledge gains.