Justice major is legislative intern for Representative Guttenberg of Fairbanks

Ruddy Abam, a Justice major and a junior at UAA, was selected to work during the 2014 Alaska legislative session as a legislative aide to Representative David Guttenberg (D) of Fairbanks.

From Cameroon, Africa, Ruddy chose to study the judicial system of the United States, and jumped at the chance to apply for the internship in Juneau. She saw this as an opportunity to learn first-hand how the legislature functions and laws are made.

Ruddy, along with two other UAA students who working as legislative aides this semester - Hans Rodvik and Victoria Yancey, are part of state government in action and will be sending word of their  experiences to the UAA community.

The Academy of Criminal Justice Sciences (ACJS) is an international association founded in 1963 to promote criminal justice education, research, and policy analysis.  Members include educators, scholars, and professionals from all sectors of the criminal justice system, and students.
Posted by UAA Justice Center at 2/25/2014 04:21:00 PM

Time to legalize? A panel discussion on March 5 on marijuana law and policy 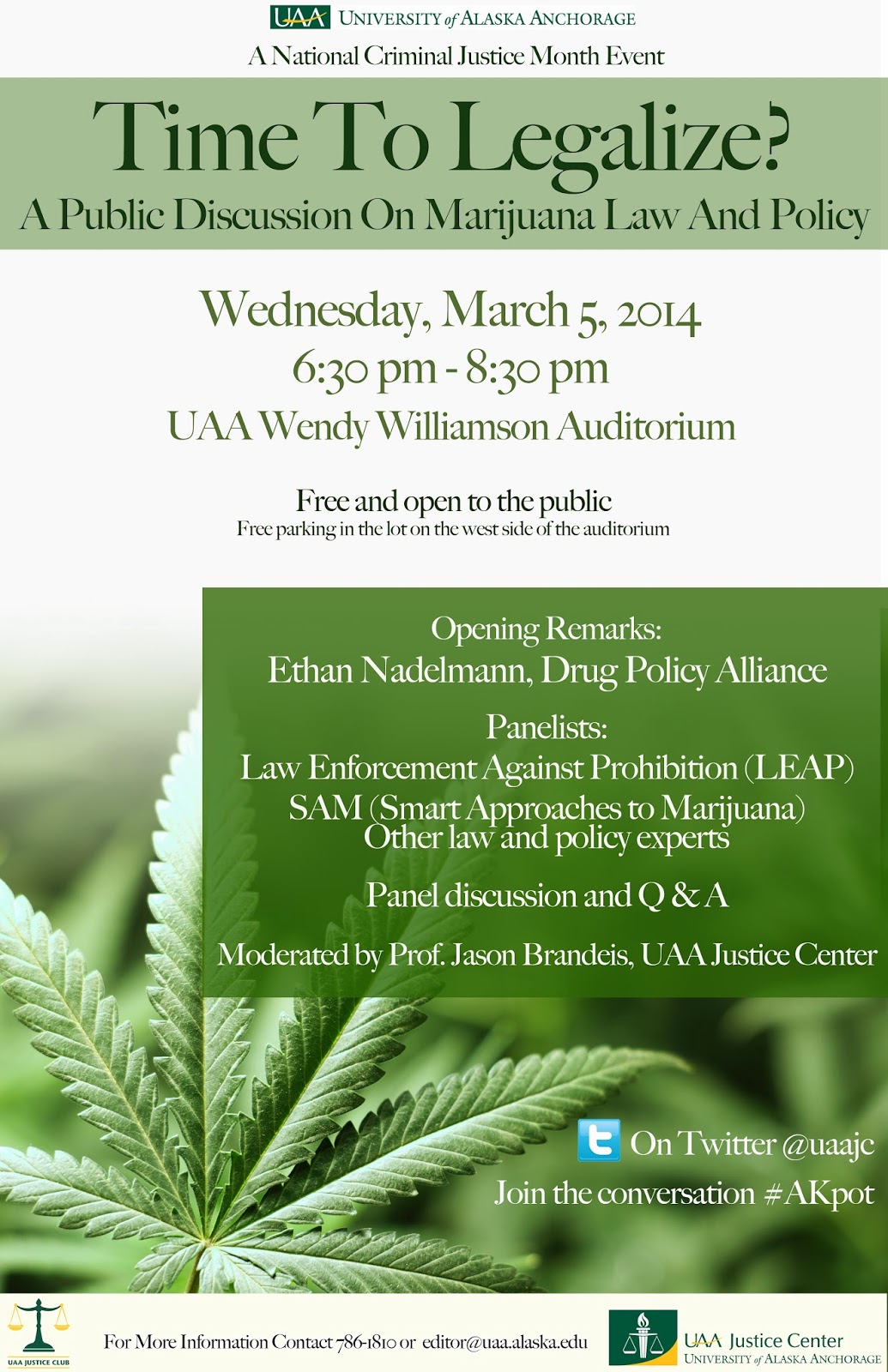 Parking: Free in auditorium west side lot
Cost:   Free to all UAA students, faculty, staff, and the public


Prof. Brandeis teaches courses on American government, constitutional law and civil liberties, and is a frequent speaker on constitutional law and other legal issues. Prof. Brandeis also maintains a private law practice through which, subsequent to the date of this program, he provided legal representation in administrative agency proceedings for the Campaign to Regulate Marijuana Like Alcohol in Alaska. 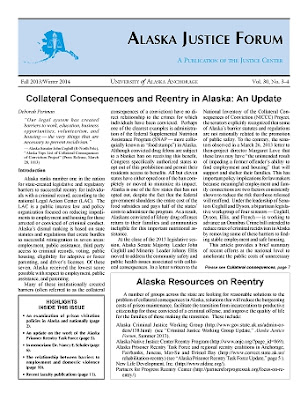 The Fall 2013/Winter 2014 issue of the Alaska Justice Forum includes articles on offender reentry and the collateral consequences of criminal conviction, the relationship between unemployment and domestic violence, and prison visitation policies. The issue also includes faculty and staff news, and a memorial to retired Justice Center faculty member Dr. Nancy E. Schafer, who died in September 2013. The 16-page issue includes the following articles:


"Collateral Consequences and Reentry in Alaska: An Update" by Deborah Periman

This article describes recent efforts at the national level to ameliorate the public costs of unnecessary collateral consequences, summarizes the array of statutory and regulatory impediments faced by released offenders in Alaska, and highlights legislative efforts in Alaska to improve community safety and public health by facilitating prisoner reintegration and reducing rates of recidivism.


"The Second Chance Act in Alaska" by Deborah Periman

This article describes impacts in Alaska of the Second Chance Act of 2007, which was enacted to address problems posed by the growing number of adults and juveniles released from incarceration and returned to their communities.


"Prison Visitation Policies in the U.S. And Alaska"

A summary of Alaska information from a national survey of prison visitation policies.

The Alaska Prisoner Reentry Task Force, a sub-committee of the Criminal Justice Working Group (CJWG), focuses on promoting the goal that individuals released from incarceration do not return to custody. This article presents an update on progress on Alaska's Five-Year Prisoner Reentry Strategic Plan, 2011–2016, which was released by Task Force in February 2011.

For more information on the Justice Alumni Chapter, contact Bridgette at bridgeellis@gmail.com or Dr. Allan Barnes, faculty advisor, at arbarnes@uaa.alaska.edu
For information about other UAA alumni chapters, contact Nona Gunn at nsgunn2@uaa.alaska.edu

Kimberly Del Frate, Justice major and a member of the University Honors College, made a presentation at the recent Western Society of Criminology Conference (WSC) on "The Arizona Issue: Racial Profiling and Civil Rights in Immigration Law Enforcement." The conference was held February 6-8 in Honolulu.

The presentation is based on her honors thesis.  Dr. Cory R. Lepage is her thesis advisor, and Prof. Jason Brandeis, J.D., is her thesis reader.  Her paper examines the questions in constitutionality  and civil rights concerns that arise with enforcement of Arizona's SB 1070 - Support Our Law Enforcement and Safe Neighborhoods Act - also known as the "Show Your Papers" law. A major focus of her work is whether or not implementation of the SB1070 constitutes racial profiling by law enforcement.

The Western Society of Criminology is a regional professional society devoted to the scientific study of crime. The society attracts scholars, students, government officials, and practitioners from both the public and private sectors from around the world.

Brooke Gladstone of NPR "On the Media" speaks in Dr. Everett's class on February 26

Brooke Gladstone, host and editor of NPR's "On the Media," will speak in Dr. Ron Everett's JUST 360 class Justice Theory and Policy Analysis this month.

She will be discussing her book, The Influencing Machine, which was chosen as one of the UAA/APU Books of the Year for 2013-2014.

Ms. Gladstone is the author of The Influencing Machine, a media manifesto in graphic form, listed among the top books of 2011 by The New Yorker, and among the “10 Masterpieces of Graphic Nonfiction” by The Atlantic.


Her career includes stints as an NPR Moscow-based reporter, its first media reporter, senior editor of NPR’s "All Things Considered," and the senior editor of "Weekend Edition" with Scott Simon. While in Anchorage, Ms. Gladstone will also be speaking at the Alaska Library Association Annual Conference.
Posted by UAA Justice Center at 2/17/2014 11:11:00 AM

The Western Society of Criminology is a regional professional society devoted to the scientific study of crime. The society attracts scholars, students, government officials, and practitioners from both the public and private sectors from around the world.

Prof. Brandeis teaches courses on American government, constitutional law and civil liberties, and is a frequent speaker on constitutional law and other legal issues. Prof. Brandeis also maintains a private law practice through which, subsequent to the date of this conference, he provided legal representation in administrative agency proceedings for the Campaign to Regulate Marijuana Like Alcohol in Alaska.
Posted by UAA Justice Center at 2/17/2014 11:06:00 AM

Dr. Payne on panel about recommendations for Anchorage Police use of force policy

Chief Mew announced at the event that a copy of the APD Use of Force Policy is now available on the APD web page.

This event was presented by the ACPRTF in partnership with the Anchorage Equal Rights Commission, the Anchorage Police Department, and the UAA Justice Center.

Dr. Payne is panelist at Feb 13 community forum on police use of force procedures 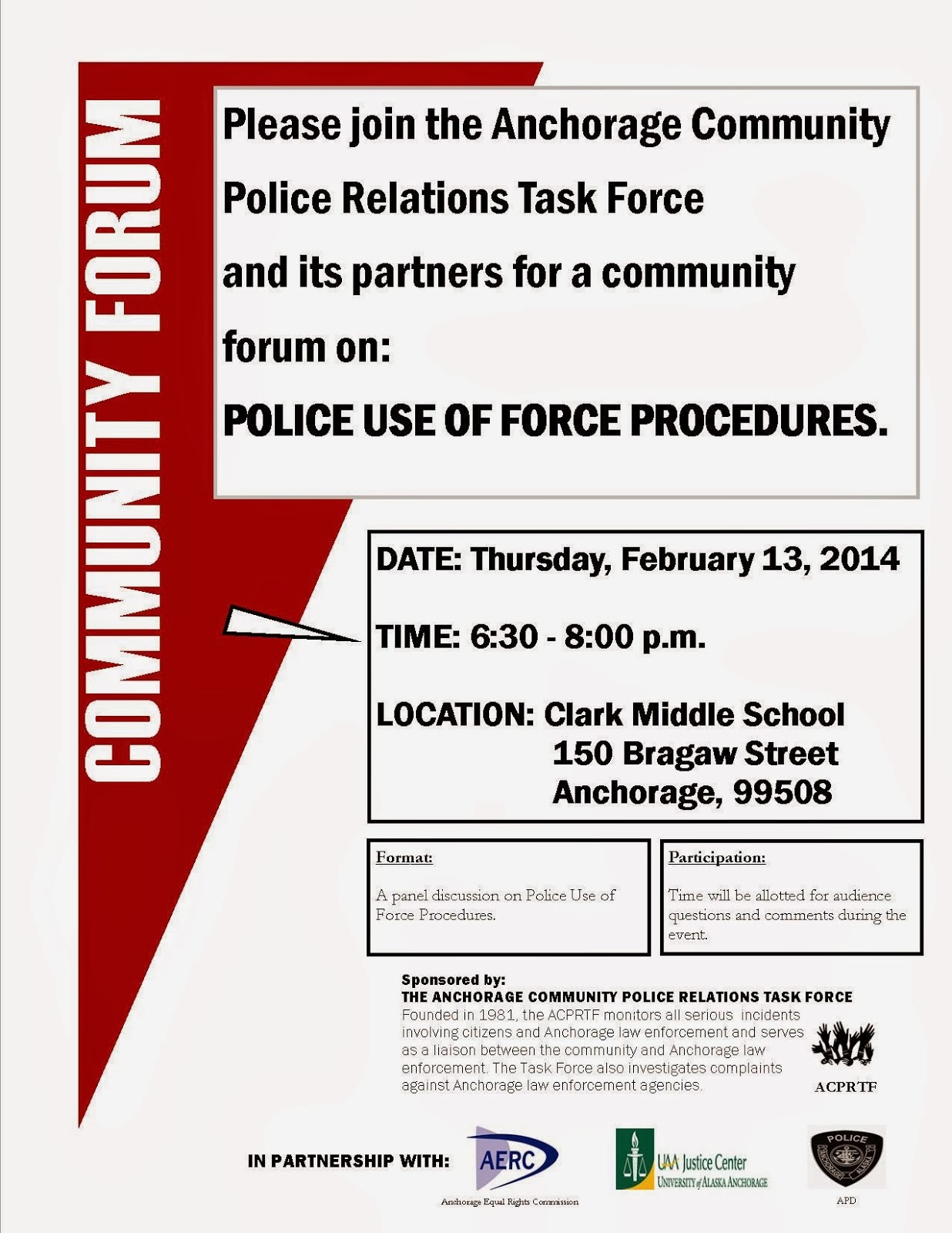 This event is presented by the ACPRTF in partnership with the Anchorage Equal Rights Commission, the Anchorage Police Department, and the UAA Justice Center.

The ACPRTF recently released the Anchorage Police Department Use of Force Policy Review Brief and Recommendations. This report looks at the history and mission of the ACPRTF, recent use of deadly force incidents by APD, efforts by APD and the ACPRTF to address community concerns about use of force, and presents the findings and recommendations of the ACPRTF's review of the Anchorage Police Department's use of force policy.

Since its establishment in 1981, the Task Force has operated successfully in its role as a liaison between the ethnic minority community and the APD.  It continues to provide a forum for input and constructive dialogue between Anchorage community members and the APD.
Posted by UAA Justice Center at 2/12/2014 04:25:00 PM 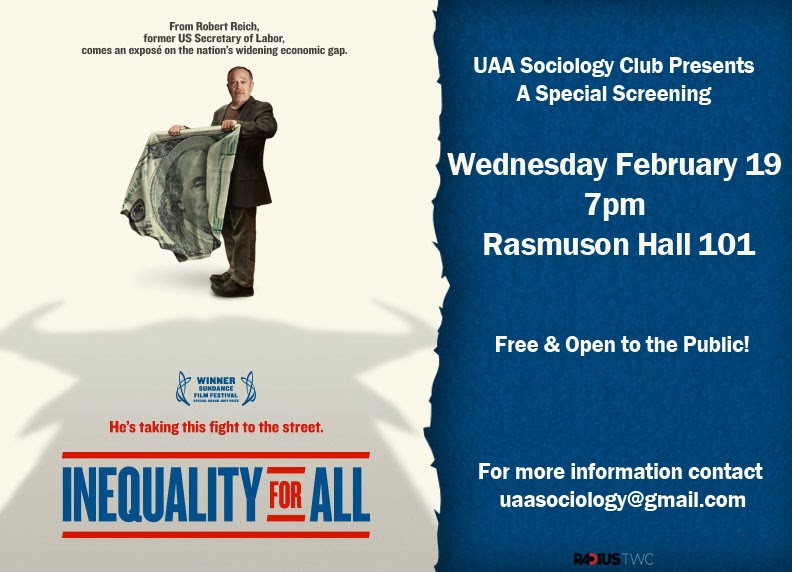 The UAA Sociology Department, the UAA Sociology Club, and the UAA College Democrats are sponsoring a free showing of the film, “Inequality for All,” by Robert Reich, former U.S. Secretary of Labor, and a special webcast with Robert Reich the day after the film.

He presented a classic ethical dilemma for students to consider and asked the class about the moral and legal obligations the dilemma posed. There was lively discussion about the issues.  Dean Bridgeman stressed the kinds of legal and moral concerns that confront individuals in the justice community and urged students to develop critical thinking skills.

The final portion of his presentation was a q & a session about law school preparation and admissions.

At right, Prof. Periman, J.D.,and Mary Hughes, J.D., a member of the University of Alaska (UA) Board of Regents, pose for a photo with Dean Bridgeman.  Both Prof. Periman and Ms. Hughes are alums of Willamette University College of Law.
Posted by UAA Justice Center at 2/12/2014 03:15:00 PM

Members of the UAA community volunteered at the 12th Annual Anchorage Project Homeless Connect (PHC) held at the Egan Center on Wednesday, January 29, 2014.  The Anchorage Coalition to End Homelessness presents this day-long program with the help of community sponsors and volunteers. The goal is to move our community closer to ending homelessness.

This event brings together service providers and government agencies under one roof to assist homeless persons in identifying their top 3 issues of concern, and then links individuals with the appropriate provider.  Hospitality is an important part of the day and a lunch is offered to attendees, as well as canned food items to take with them.  Similar programs are presented in cities across the United States.

The initial interview with each attendee also presents an opportunity for collecting information about who is homeless and why.  This data is aggregated and provides a tool to assist service providers and government agencies in policy making and structuring services.

Preliminary estimates show that 600 individuals were served on January 29. The final report for this event will be available shortly.
Posted by UAA Justice Center at 2/06/2014 12:21:00 PM 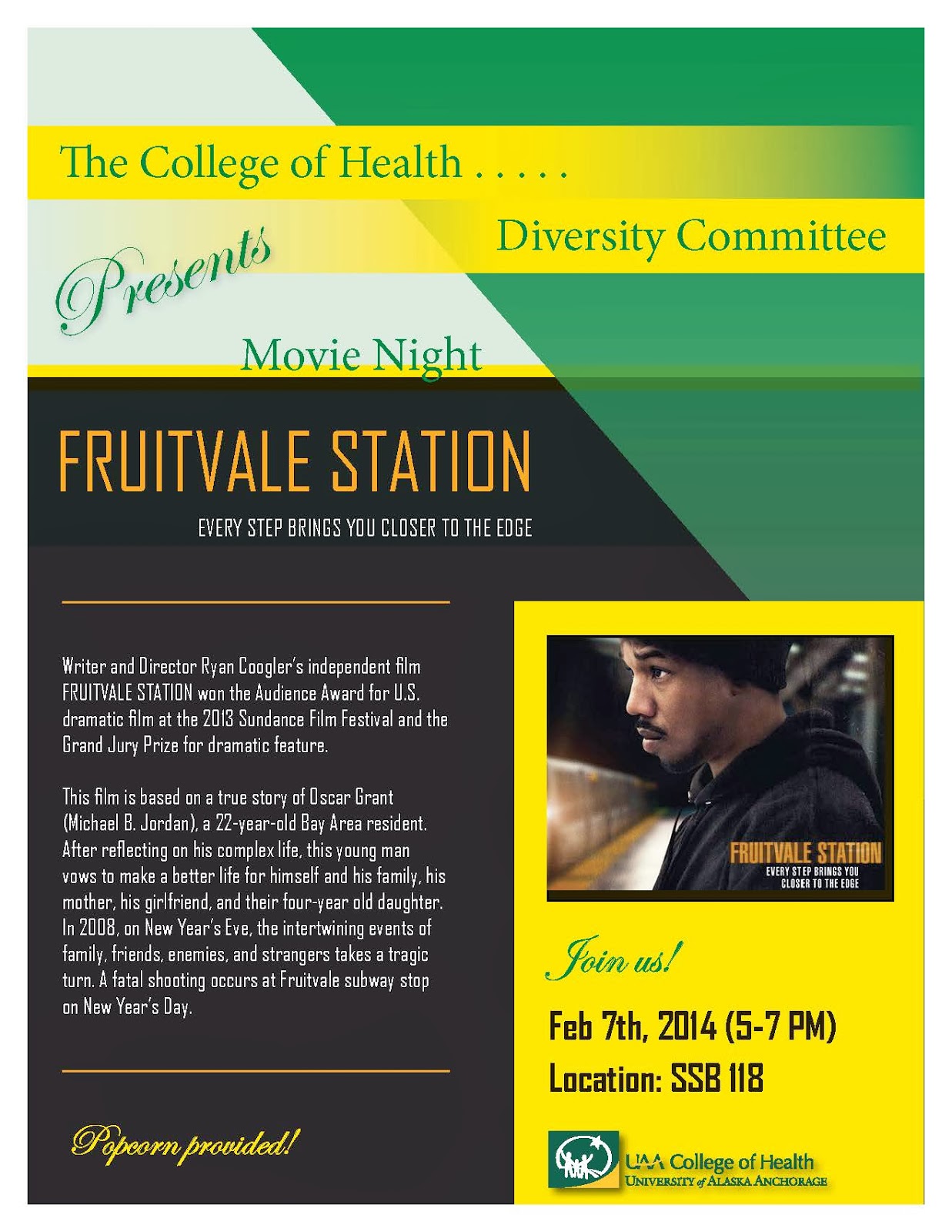 The College of Health Diversity Committee is sponsoring a free film discussion and popcorn event for UAA students:

The film, "Fruitvale Station," looks at the police shooting of an unarmed young black man on a BART train in Oakland, California on New Year’s 2009.

Justice and Legal Studies students may find this film particularly interesting to view and talk about together.  A faculty-facilitated group discussion follows the film.

This event is presented as part of a series of educational programs for UAA students on issues related to diversity.

Preview Days is designed specifically for high school juniors and seniors and their guests and helps students get ready to attend UAA.

The event offer students and their guests the opportunity to experience firsthand all that UAA has to offer. Students attend a mock class, workshops on admissions and financial aid, and speak with current students about campus life as well as UAA faculty about academic programs. Guests speak with UAA administrators and also attend workshops on admissions and financial aid.

Dr. Payne is panelist at upcoming community forum on police use of force procedures 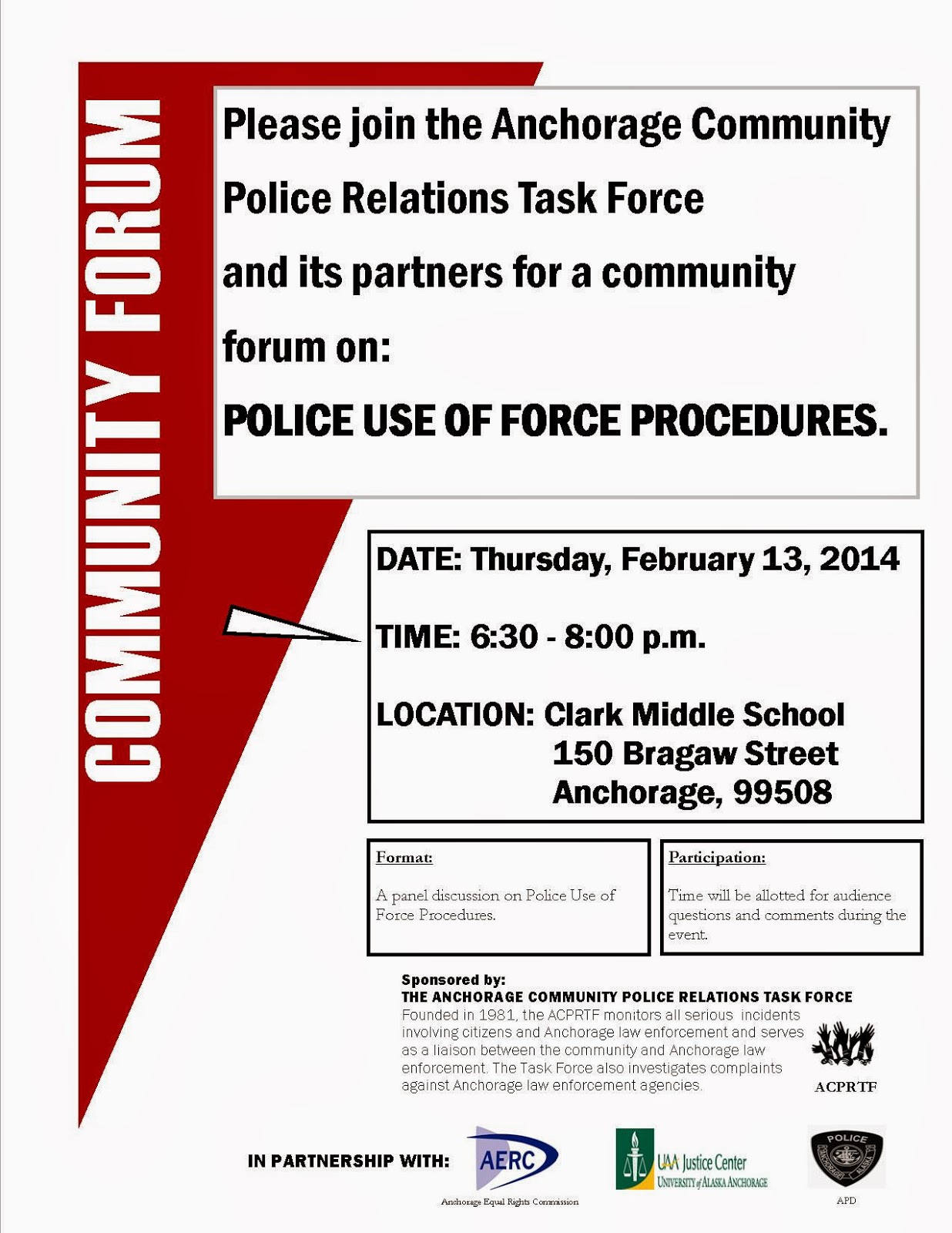 This event is presented by the ACPRTF in partnership with the Anchorage Equal Rights Commission, the Anchorage Police Department, and the UAA Justice Center.

Since its establishment in 1981, the Task Force has operated successfully in its role as a liaison between the ethnic minority community and the APD.  It continues to provide a forum for input and constructive dialogue between Anchorage community members and the APD.

All students are welcome to this event.