Miranda Strong, 2008 UAA philosophy graduate and Justice Center student, is attending the University of Washington School of Law as a Gates Public Interest Scholar. Miranda is a legal intern at the Disability Law Center of Alaska for the summer of 2009.
Posted by Barbara Armstrong at 6/30/2009 09:01:00 AM

Justice Center data from the Fall 2008 Alaska Justice Forum concerning sexual assaults in Alaska was cited by KTUU Channel 2 News during their report on violence against women and Governor Palin's signing of House Bill 63 on June 24, 2009. House Bill 63 is effective July 1, 2009 and expands the make-up of the Alaska Council on Domestic Violence and Sexual Assault to include a public member from rural Alaska, and the Commissioner of Corrections or the Commissioner's designee.

Dr. André B. Rosay has been appointed Director of the Justice Center. From 2007 to 2009, Dr. Rosay served as the Interim Director. He is an Associate Professor of Justice and received his doctorate in Criminology and Criminal Justice from the University of Maryland at College Park. He has published numerous articles and made many presentations on domestic violence and sexual assault issues and on juvenile justice issues. Dr. Rosay also serves on a variety of committees including the McLaughlin Youth Center Citizen Advisory Board and the Anchorage Police Department Strategic Planning Committee. He recently received an Ulu Award from the Alaska Native Justice Center in recognition of his dedication and support to justice research in Alaska.
Posted by Barbara Armstrong at 6/26/2009 09:50:00 AM

Shannon Calt, 2008 Justice Center graduate, has been selected for the editorial board of Lewis & Clark Law Review. This summer Shannon is volunteering as a Judicial Extern for the Honorable Ancer L. Haggerty, Judge for the United States District Court for the District of Oregon, and will be starting his second year of law school at Lewis & Clark this fall.
Posted by Barbara Armstrong at 6/23/2009 11:30:00 AM

Dr. Marny Rivera, Justice Center faculty, was invited to publish her teaching strategy, "Journaling for Justice: Weekly Student Journal Entries" in the May-June 2009 "The Criminologist Online," the official newsletter of the American Society of Criminology, for their regular feature, "Teaching Tips."
Posted by Barbara Armstrong at 6/22/2009 10:45:00 AM

The Justice Center co-sponsored "Deferred Justice: The 1963 Birmingham Baptist Church Bombing" with the Alaska Bar Association, the Alaska chapter of the American Board of Trial Adocates (ABOTA), and the Alaska chapter of the American Civil Liberties Union (ACLU) on June 17, 2009 in Anchorage. Over 60 lawyers and students attended the two-hour program presented by Doug Jones, former Alabama U.S. Attorney. While U.S. Attorney, Mr. Jones reopened the case in 2000 and ultimately won convictions in the trials of Ku Klux Klansmen Tommy Blanton and Bobby Frank Cherry, for the crime that was called, "the deadliest of the civil rights era." 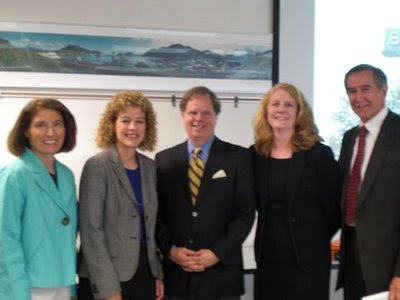 Dr. Daniel S. Nagin, Professor of Public Policy and Statistics at Carnegie Mellon Heinz College, will present a 3-day workshop on group-based models for analyzing developmental trajectories on July 6, 7, and 8. This invitation-only intensive program for social behavioral science researchers is hosted by the Justice Center and will train participants to use group-based models in a variety of health and social welfare disciplines. These models can describe, summarize, and analyze individual and environmental changes over time. Dr. Nagin is an internationally known expert in this field and has published extensively on group-based models. For more information, please contact Dr. André Rosay, Justice Center Director, 907-786-1821 or e-mail afabr@uaa.alaska.edu.
Posted by Barbara Armstrong at 6/15/2009 01:55:00 PM

Dr. Allan Barnes, Justice Center faculty, has been selected as one of ten UAA faculty members on the Summer 2009 Outcomes Assessment Peer Review Committee. This committee reviews UAA's academic program plans and reports as part of UAA's ongoing commitment to excellence in education.
Posted by Barbara Armstrong at 6/15/2009 11:13:00 AM

Dr. Lawrence Trostle, Professor at the Justice Center for eighteen years, is retiring in June of 2009. Dr. Trostle received his Ph.D. in criminal justice from Claremont Graduate School, where he was also Co-director of the Haynes Foundation Law Enforcement Training Grant. One of his major teaching and research areas has been law enforcement, and he is the author and co-author of numerous articles including, “Policing the Arctic: The North Slope in Alaska,” “The Nonenforcement Role of Police in Western Alaska and Eastern Canadian Arctic: An Analysis of Police Tasks in Remote Arctic Communities,” and “The Alaska Territorial Police.” His course, “Cinematic Images of Justice,” was a perennial favorite in which he explored crime and justice issues with students in an engaging and interactive way. Dr. Trostle brought his real world experience in law enforcement to his teaching and research, having served with the Los Angeles Country Sheriffs’ Department and also with the San Marino, California Police Department. He is the past president of the Western and Pacific Association of Criminal Justice Educators, and served on many community committees and advisory boards including the Alaska Civic Learning Assessment Project, as well as on a variety of UAA committees. Dr. Trostle’s long-time contributions to the Justice Center are many and invaluable, and the entire UAA community appreciates his service and commitment.
Posted by Barbara Armstrong at 6/10/2009 10:50:00 AM

Dr. Marny Rivera, Justice Center faculty and project manager for the evaluation of the Alaska Meth Education Project, has begun surveying by mail a random sample of 10,000 Alaskan residents. The survey asks residents about their views on the relative risks of meth use and about their familiarity with the ongoing meth education advertising campaign. The results of the survey will be available by fall 2009 and will be posted on the Justice Center website. For more information, please contact Dr. Rivera at 907-786-1126 or afmsr1@uaa.alaska.edu.
Posted by Barbara Armstrong at 6/09/2009 12:18:00 PM

Dr. André Rosay, Justice Center Interim Director, has been invited to serve on the Disproportionate Minority Contact in the Juvenile Justice System Subcommittee of the Alaska Court System Fairness and Access Committee. Superior Court Judge Ben Esch of Nome is the chair; other committee members include Teri Carns of the Alaska Judicial Council, Steve McComb of the Alaska Division of Juvenile Justice, and Karen Neagle of the Alaska Native Justice Center. The subcommittee is responsible for making recommendations to the full committee regarding this issue. Click here for the 2007 report of the Alaska Supreme Court Fairness and Access Implementation Committee.
Posted by Barbara Armstrong at 6/08/2009 09:00:00 AM

Dr. André Rosay, Justice Center Interim Director, presented an overview of sexual violence in Alaska to the Advisory Council of the National Sexual Violence Resource Center on June 1 in Anchorage. The National Sexual Violence Research Center (NSVRC) opened in July 2000 as a national information and resource hub relating to all aspects of sexual violence.

Dr. Rosay's Powerpoint presentation to the Advisory Council, entitled "Sexual Violence in Alaska," is available on the Justice Center website. Further information about sexual violence and violence against women is available on the Justice Center's Violence against women page.
Posted by Barbara Armstrong at 6/02/2009 03:00:00 PM

Professor Deborah Periman, Justice faculty member, is participating as a panelist and on the planning committee for the "Color of Justice 2009 - Encouraging Diversity in the Judiciary "
program scheduled for Thursday-Friday, June 18-19, 2009, and sponsored by the National Association of Women Judges with additional support from the University of Alaska Anchorage, the Alaska Court System, and other educational and community partners.

The "Color of Justice" program brings diverse youth from across Alaska together for two days of exciting workshops and activities designed to encourage them to consider legal and judicial careers and to introduce them to campus life.