Welcome from the Justice Center to our new and returning Justice and Paralegal students.

Don’t forget we have a computer lab for Justice Center students open Monday thru Friday, 8:00 AM–5:00 PM (closed on holidays) located in our office suite, Library 213.

If you have any questions or need to talk to an advisor, faculty will be returning August 10. They will be available to set up appointments with students at that time.

If you do not know who your advisor is, call our main line 786-1810, and we'll provide you with that information.

If you must meet with an advisor prior to August 10, the College of Health and Social Welfare (CHSW) has an advisor on call to answer questions about the Justice Center programs. You can contact Russ Pressley, CHSW Academic Advising Coordinator, at 786-4405.

The Spring 2009 issue of the Alaska Justice Forum focuses on therapeutic and problem-solving courts, an update on Alaska justice system operating expenditures, a report on the work of the Criminal Justice Working Group, and news about Justice Center appointments and forthcoming publications.

This article examines the Anchorage Wellness Court (AWC), which deals with misdemeanor alcohol offenders, including those who drive under the influence (DUI); discusses the concepts of therapeutic jurisprudence and problem-solving courts; and examines the challenges to the longstanding need and demonstrated potential for success of the AWC program. The author discusses societal views of DUI drivers and explores the broader issue of “impaired” drivers: those, for example, who drive while talking on cell phones. Four recommendations are given for the AWC: to reorient and/or clarify policy goals regarding drunk drivers; to develop alternative treatment programs and expand the number of available treatment providers; to establish a 5-year follow-up program with potential for expunging arrest and conviction records and other incentives; and to develop proactive, rather than reactive, polices of prevention to confront alcohol-impaired drivers and the underlying problem of alcohol abuse and addiction. A sidebar highlights sanctions for DUIs under Alaska Statute Section 28.35.030 and Anchorage Municipal Code 9.28.020.

Coordinated and staffed by the Alaska Judicial Council, the Criminal Justice Working Group (CJWG) is made up of representatives from the executive branch justice agencies and other justice system agencies and organizations in Alaska. The CWCG has focused on two main aspects of the criminal justice system: crime prevention and reduction of recidivism; and efficiencies in the system. This article outlines the CJWG's recent work and accomplishments.

A bibliography or articles and studies on therapeutic courts and jurisprudence nationally and in Alaska. Most are available online.

Announcing the appointment of Dr. André Rosay as Director of the Justice Center; Dr. Brad Myrstol as Assistant Professor; and Khristy Parker and Jennifer McMullen as research assistants.

Announcing the retirement of Dr. Lawrence Trostle, an 18-year faculty member, from the Justice Center.

Dr. Sharon Chamard, Justice Center faculty, was interviewed by the Anchorage Press in her capacity as President of the Fairview Community Council. The article in the July 23-29 issue concerns the impact of the highway-to-highway interconnect between the Seward Highway and the Glenn Highway on the Fairview neighborhood.
Posted by Barbara Armstrong at 7/27/2009 10:00:00 AM

For further information on sexual assault in Alaska, see the Justice Center bibliography on violence against women.
Posted by Barbara Armstrong at 7/24/2009 04:30:00 PM

Barbara Armstrong has joined the Justice Center as writer and editor. With 20 years of experience as Continuing Legal Education Director and Assistant Director of the Alaska Bar Association, she brings a broad knowledge of Alaska justice agencies and extensive experience in research and publication. Ms. Armstrong will provide editorial leadership for the Alaska Justice Forum and will coordinate all of the Justice Center’s public dissemination activities.
Posted by Barbara Armstrong at 7/17/2009 12:03:00 AM

Tabatha Harris, 2007 Justice graduate, is working as a case manager in the Denver County Jail Women's Mental Health Transition Unit as part of the Prisoner Reentry Program. Most of the women in this unit have a dual diagnosis of mental illness and substance abuse, and many have a history of trauma. Their offenses range from traffic charges, to prostitution, to murder. Tabatha assists these individuals in working through problems in a positive way, as well as finding resources for them upon release. Homelessness is the biggest issue. To date, this program has contributed to reducing recidivism, maintaining safety, and lowering expenses as women stay out of jail longer and use positive coping skills in place of medications. Tabatha finds her work challenging and rewarding, and enjoys her "daily adventures" at the County Jail. This program is through the Denver County Sheriff Department and funded by the Department of Justice.
Posted by Barbara Armstrong at 7/14/2009 12:40:00 PM

"Sex Offender Registries and Notification Programs," the fourth issue of the Justice Center Research Overview, presents a brief history of sex offender registries and notification programs nationally and in Alaska; describes provisions of Alaska's registry/notification laws; and discusses recent research findings about the effectiveness of such laws and their impact on offenders.

The research overview was prepared by Deborah Periman, who has previously written on Alaska's sex offender registry law for the Spring/Summer 2008 issue of the Alaska Justice Forum.
Posted by UAA Justice Center at 7/14/2009 09:20:00 AM

Dr. Ron Everett, Justice Center faculty, and UAA Justice Center students, join a criminal justice study tour in Germany from July 17 – August 2, 2009. The program is organized by Prof. Finn Esbensen, Dept. of Criminology and Criminal Justice at University of Missouri-St. Louis and administered through the Center for International Studies, University of Missouri-St. Louis. Prof. Elmar Weitekamp and Prof. Hans-Juergen Kerner from the Institute of Criminology at Eberhard Karls University of Tuebingen will accompany the tour and participate in seminars on comparative criminology/criminal justice. For more information, contact the Justice Center at 907-786-1810 or ayjust@uaa.alaska.edu.
Posted by Barbara Armstrong at 7/14/2009 08:45:00 AM

Dr. Daniel S. Nagin, Professor of Public Policy and Statistics at Carnegie Mellon Heinz College, concluded today his presentation of a 3-day workshop on group-based models for analyzing developmental trajectories. This invitation-only intensive program held July 7, 8, and 9 for social behavioral science researchers was hosted by the Justice Center and trained participants to use group-based models in a variety of health and social welfare disciplines. These models can describe, summarize, and analyze individual and environmental changes over time. Dr. Nagin is an internationally known expert in this field and has published extensively on group-based models.

Dr. Brad Myrstol has joined the faculty of the Justice Center. He was most recently an Assistant Professor in the Department of Sociology and Criminal Justice at the University of Arkansas, Fayetteville, and also held an appointment as a Research Assistant Professor at the Community and Family Institute of the University of Arkansas. Dr. Myrstol received his Ph.D. from Indiana University, and his recent research has examined public perceptions of police and other legal actors, homelessness and criminal justice, and the relationship between substance abuse and crime. He is a former research faculty at the UAA Justice Center where he co-authored a number of studies and articles.

Khristy Parker, B.A., University of Alaska Anchorage and Jennifer McMullen, M.A., Simon Fraser University, have joined the staff as research assistants. Ms. Parker will be working with Dr. Sharon Chamard on aspects of the Anchorage Community Survey and other projects, and Ms. McMullen will be working with Dr. Marny Rivera on the evaluation of the Alaska Meth Education Project.
Posted by Barbara Armstrong at 7/06/2009 04:25:00 PM 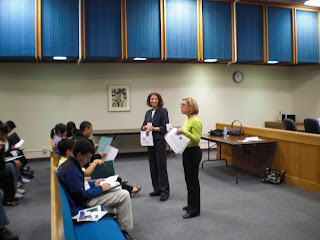 Professor Deborah Periman, Justice faculty member, participated as a panelist and on the planning committee for the "Color of Justice 2009 - Encouraging Diversity in the Judiciary" program on Thursday-Friday, June 18-19, 2009 at the UAA campus and the Alaska Court. Over 75 high school students attended this program sponsored by the National Association of Women Judges with additional support from the University of Alaska Anchorage, the Alaska Court System, and other educational and community partners.

Left to right: Professor Periman and co-presenter Susan Lee, Director of Admissions for Gonzaga University School of Law highlighted the academic roadmap for planning for college, law school, and a career in justice.
Posted by Barbara Armstrong at 7/06/2009 04:00:00 PM