Christopher Slottee, Vice-President/General Counsel for Old Harbor Native Corporation spoke to students in Prof. Ryan Fortson's Contracts, Debt and Principles of Ownership (LEGL 362) class this week. Slottee talked about drafting contracts and the different types of contracts and issues he encounters in his practice.

"It's very valuable for students to  hear lawyers talk about their work," Fortson said. "My friend, Chris, has been very generous with his time and expertise. It makes a difference to our students."

Slottee began as general counsel for Old Harbor Native Corporation in June of 2015 and before that was a partner in the Anchorage law firm of Atkinson Conway & Gagnon, where he represented Old Harbor in a number of legal matters. Last year, Slottee talked about issues related to Native corporations for Prof. Fortson's Tribal Courts and Alaska Native Rights class.
Posted by Pamela Cravez at 3/31/2017 09:42:00 AM

Join the UAA Justice Club for a panel discussion of mental health care among juvenile and adult correctional populations, the last in our National Criminal Justice Month 2017 series of discussions.

Learn how Alaska tackles these issues at a panel discussion with experts from the Division of Juvenile Justice and Department of Corrections:

New plan to strengthen trust between police and community

“We’re not just the people with the gun and badge,” Capt. Sean Case said last week as he explained Anchorage Police Department’s Community Action Policing (CAP) initiative and expanded foot patrols. We don’t just deal with something and go away, he said.

Mayor Berkowitz, who left an Assembly meeting to participate in the discussion, pointed out that “it is important to us to enhance community safety and to protect officer safety and do it in a way where there’s a lot of community trust.”

Anchorage is one of the most ethnically diverse communities in the country with four out of the five most diverse high schools. “Let’s show everyone else we can get along,” Mayor Berkowitz said.

The idea is to proactively prevent crime instead of react to it, according to a letter Mayor Berkowitz sent to the Anchorage community regarding APD’s 2017 Targeted Crime Plan.

Three neighborhoods, Mountain View, Spenard and Fairview will get foot patrols. These three neighborhoods have been targeted because of a history of higher call column. They are condensed and easier to get to on foot. The communities have also been asking for better services.

The idea came from the Task Force on 21st Century Policing, Mayor Berkowitz said. The Task Force, created by President Barack Obama was part of the Administration’s efforts to “strengthen community policing and strengthen trust among law enforcement officers and the communities they serve.”

Jamie Boring, executive director of the Anchorage Downtown Partnership, spoke about the drop in crime downtown experienced with the addition of foot patrols.

Under Mayor Berkowitz, APD has grown to over 400 officers with another 56 in the training cycle. There are also more than 90 officers eligible to retire. Still, 2017 will see some gains, Capt. Case said, and encouraged students to think about applying for the academy.

Join the UAA Justice Club as they present a panel discussion of alternative courts in Alaska's state and federal district courts. 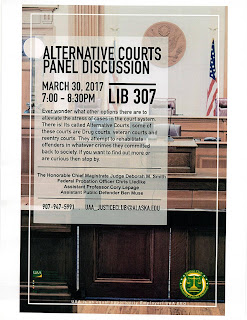 Drug courts, veteran courts and reentry courts offer offenders an opportunity to work with a collaborative team toward treatment and rehabilitation. Learn more about how these courts operate with:
National Criminal Justice Month events are sponsored by the Justice Center and the UAA Justice Club.
Posted by Pamela Cravez at 3/27/2017 12:15:00 PM

Dr. Myrstol and Dr. Araceli Valle, AJiC research professional, fielded questions from the working group regarding how costs of programs were determined as well as how recidivism rates were calculated. They told the working group that program costs were provided by ADOC and only the state’s investment in programs was used to calculate each program’s benefit cost ratio, a monetary measure of the state’s return on investment. Estimates of recidivism reduction and victimization costs avoided when recidivism is reduced were derived from research conducted outside of Alaska.

Alaska is one of more than 30 jurisdictions throughout the country to partner with the Pew-MacArthur Results First Initiative. The initiative  uses innovative research tools to analyze the benefit cost ratio of evidence-based programs designed to reduce recidivism.

“The presentation went well,” Dr. Myrstol said. “It generated a lot of discussion and gave the group a lot to think about how this specific resource can be used to inform future program investment decisions.”

Other programs to be run through the Results First adult criminal justice model include therapeutic courts, ASAP (Alcohol Safety Action Program), and Alaska’s batterers’ intervention programs.
Posted by Pamela Cravez at 3/24/2017 11:38:00 AM

Dr. Lindsey Blumenstein, Justice faculty, spoke of the need for continued work to address intimate partner and sexual violence at yesterday's Choose Respect march in Anchorage. She presented data from the Alaska Victimization Survey on the impact of stalking on victims of intimate partner and sexual violence. In recognition of her work to make a difference in the lives of women and girls of Alaska, Dr. Blumenstein received the Zonta Rose Day award from the Zonta Club of Anchorage.  Zonta is a service organization dedicated to improving the lives of women and children through education, funds and service projects.
Posted by Pamela Cravez at 3/24/2017 11:10:00 AM

Tales from territorial lawyers and judges in new book 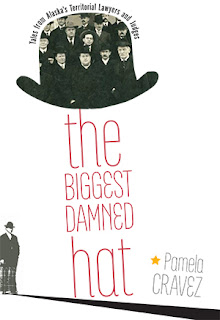 University of Alaska Press released The Biggest Damned Hat: Tales from Alaska's Territorial Lawyers and Judges by Pamela Cravez, editor of the Alaska Justice Forum and research associate at the Justice Center.

Built on interviews and oral histories from more than fifty lawyers who worked in Alaska before 1959, and buttressed by research into legal history, The Biggest Damned Hat provides new perspectives on Alaska history from gold rush times to statehood. Clubby, passionate and powerful, territorial lawyers developed their own brand of civil and criminal law in the face of uneven and, at times, unscrupulous federally appointed judges. Bringing to life a time long past—when some of the best lawyers had little formal legal education—The Biggest Damned Hat fills in a crucial part of Alaska’s history.
Posted by UAA Justice Center at 3/24/2017 08:03:00 AM

Dr. André Rosay, Justice Center director, was awarded a competitive Visiting Fellowship with the National Institute of Justice (NIJ) in the Office of Justice Programs at the U.S. Department of Justice in Washington DC. NIJ's Visiting Fellows Program brings experienced practitioners, policymakers, and — in exceptional circumstances — researchers into residency at NIJ to make important policy and scholarly contributions with practical application to the criminal justice field and to infuse research into policy and practice. According to NIJ Acting Director Howard Spivak, Dr. Rosay's collection of data and reports regarding American Indians and Alaska Natives "is one of the seminal projects in [NIJ's] portfolio of research about violence against women in tribal communities." During his Fellowship, Dr. Rosay will be working on peer reviewed publications using data from the National Intimate Partner and Sexual Violence Survey. This is Dr. Rosay’s second Fellowship with the National Institute of Justice.
Posted by Pamela Cravez at 3/21/2017 02:01:00 PM

National Criminal Justice Month events are sponsored by the Justice Center and the UAA Justice Club. 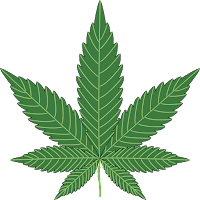 Prof. Jason Brandeis, Justice faculty, examines different scenarios that may unfold regarding federal enforcement of marijuana laws under President Donald Trump and newly appointed Attorney General Jeff Sessions in, “Status of marijuana law confused by election.” The article appears in the January–March 2017 edition of Alaska Bar Rag, a publication of the Alaska Bar Association. Prof. Brandeis provides a look at how the “fragile truce” that has been established between the federal government and states that have legalized marijuana may or may not hold in the coming years.


Prof. Brandeis teaches courses on the American legal system, constitutional law, and civil liberties, and is a frequent speaker on constitutional law and other legal topics.  Prof. Brandeis also maintains a private law practice through which he advises clients on marijuana law and policy questions.  This law practice preceded this publication, and included providing legal services to the Campaign to Regulate Marijuana Like Alcohol in Alaska.
Posted by Pamela Cravez at 3/15/2017 01:09:00 PM

For the past 15 years, Prof. Ryan Fortson, Justice Center faculty, has taken a leading role in organizing the Alaska High School Mock Trial Competition, sponsored by the Young Lawyers Section of the Anchorage Bar Association. In addition to coordinating volunteers, Prof. Fortson serves as principle liaison with schools and develops the materials (with the help of other volunteers) used by high school students.

This year Prof. Fortson provided students with a case involving the death of a participant in a fictional remote Alaska reality show. Teams of six to nine high school students were pitted against one another in a simulated wrongful death bench trial. Students played the roles of attorneys and witnesses and were evaluated by a panel of judges, attorneys, and law clerks. The final round took place in the courtroom of the Alaska Supreme Court on Saturday, March 4.
Posted by Pamela Cravez at 3/13/2017 12:23:00 PM

Dr. Brad Myrstol, Justice Center faculty and director of the Alaska Justice Information Center (AJiC) and the Alaska Justice Statistical Analysis Center (AJSAC), and Dr. Araceli Valle, AJiC research professional, presented findings from the Alaska Results First Initiative to Dean Williams, commissioner of the Alaska Department of Corrections (ADOC), this week. Alaska is one of more than 30 jurisdictions throughout the country partnering with the Pew-MacArthur Results First Initiative to use innovative research tools to analyze the benefit to cost ratio of evidence- based programs to reduce recividism. Alaska Results First analysis of evidence-based ADOC programs provides policymakers with a tool to better understand the relationship between the state’s investment in programs and the return on that investment in terms of the reduced future costs of recividism.
Posted by Pamela Cravez at 3/10/2017 12:58:00 PM

Lucy Cuddy Hall was filled with 30 teams of legal eagles and youth court supporters engaged in a battle of intelligence and arcane knowledge on Friday, March 3. The Justice Center, fielding its first team, battled for first with the Anchorage Bar Association through four rounds, but slipped to third behind Team Morrison and the Anchorage Bar after a round of questions on Olympic history.  Who knew bowling was an Olympic demonstration sport?


The Justice Center was a co-sponsor of the annual Gavel Games, the largest fundraiser for Anchorage Youth Court (AYC). AYC provides an opportunity for students to serve as attorneys, judges, bailiffs, clerks and jurors in cases involving their peers. Youth in grades 7 through 12 accused of minor offenses, are referred by the Alaska Division of Juvenile Justice to AYC to have their cases heard. Youth found guilty are spared a formal juvenile record if they complete their sentence and do not break the law again.
Posted by Pamela Cravez at 3/08/2017 12:05:00 PM

After a short presentation, the panelists went from table to table, fielding questions and showing students how different medical devices worked.