The 18-04 and 18-05 (September 2018) issues of the AJiC Fact Sheet present data on drug sale and manufacture arrests and drug possession arrests in Alaska for 1986 to 2017. Data are drawn from the annual Crime in Alaska report of the Alaska Department of Public Safety, which represents the State of Alaska's contribution to the FBI's Uniform Crime Reports (UCR) program. 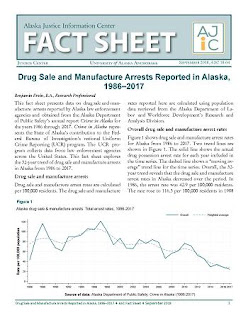 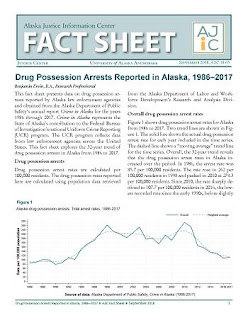 This fact sheet presents presents data on drug sale possession arrests reported by Alaska law enforcement agencies for the 32-year period 1986 to 2017. Overall, the drug possession arrest rate plateaued between 1998 and 2010, consistently declined from 2010 to 2016, and slightly increased in 2017.  The lowest recorded overall drug possession arrest rate was in 1990. Rates increased from 1986 through 1998, then declined for all populations from 2010 to 2016. The adult and male populations drive the overall trend in arrest rates, accounting for roughly four out of every five arrestees during this 32-year period. The trend shows less discrepancy in arrest rates between males and females, as well as between adults and juveniles after 2010.