Call for papers on Alaska's Constitution for October symposium

Papers are being accepted for the Alaska Law Review and Justice Center sponsored symposium on the Alaska Constitution to be held Friday, October 12, at UAA.

In recognition of the 60th anniversary of Alaska statehood in January 2019, the Alaska Law Review is dedicating its December 2018 issue to the Alaska Constitution and hosting, with the Justice Center, a symposium on that topic.

This is the third in a series of  jointly sponsored symposiums designed to bring together students, lawyers, academics and judges on current and pressing legal issues facing Alaska. Past topics have included the changing implications of the Alaska Native Claims Settlement Act and environmental and economic changes facing Alaska.

The December 2018 issue of the Law Review will be a "Symposium Publication" issue that includes articles related to the symposium topic.

Suggested topics for papers relevant to Alaska's Constitution include:

Submissions of any length are welcome. Deadline is August 1, 2018, with the possibility of extension if necessary. Contact the Alaska Law Review staff by email or read Alaska Law Review's submission guidelines..

The June 2018 issue of the Alaska Law Review is now available and features an article on the 2017 Tax Act, a book review on  "Sources of Alaska Legal History," and notes on eyewitness identification and renewable energy production in the arctic.

"Sources of Alaska Legal History: An Annotated Bibliography' by W. Clinton 'Buck' Sterling," is a new resource for Alaskans and others interested in Alaska's legal history, and is reviewed favorably by Samuel G. Gottstein.

"Fresh Eyes: Young v. State’s New Eyewitness Identification Test and Prospects for Alaska and Beyond," by Savannah Hansen Best, looks at how Alaska has joined New Jersey and Oregon in "employing a new and evolving admissibility test [for eyewitness identification] with scientific support, consideration of both systemic and estimator variables, and a call for corresponding jury instructions."

"Breaking Barriers to Renewable Energy Production in the North American Arctic," by Henrik Strand, looks at examples of how other countries have solved technical, economic, regulatory and community engagement problems to support renewable energy in remote areas. Strand advocates for Alaska Native Corporations to play a role in breaking down barriers, along with the development of public-private partnerships.

Piper Kerman, who spent over a year in federal prison on a conviction for money laundering and drug trafficking, wrote a book about her experiences that has been turned into a popular Netflix series. She has also become an advocate for prison reform. Last week she spoke at the Alaska Bar Convention about how prison is being used to house the country's marginalized populations.

Not all people are policed or prosecuted or sentenced equally, Kerman said.  The highest rate of incarceration is among Native American girls whose offenses often involve status, homelessness and truancy. She added that African American men are four times more likely to be arrested for possession of marijuana, although studies show that white people are just as likely to smoke marijuana as black people.

Over the last 10 years, according to Kerman, there has been a 650% increase in the rate of incarceration of women. This is not because of a female crime wave but because of harsh punishments. Two-thirds of incarcerated girls and women are there for drug offenses and property crimes - this is more indicative of the system doubling down on harsh punishment rather than more crime, according to Kerman.

The Netflix series, "Orange is the New Black," looks at the lives of women in prison. The story lines in the series - which has been renewed for a 7th season - have traveled far from Kerman's memoir and explore the lives of people in and out of jail.

An audience member brought up Alaska's efforts at criminal justice reform with SB91 and asked Kerman how society's need for retribution is best addressed while tackling reform. Kerman recommended switching the conversation to accountability rather than retribution. What would accountability look like without banishment - which is essentially what prison does, she asked.

When asked about the most important avenues to reform, Kerman responded that it is in the hands of prosecutors to reduce charges — which will reduce prison sentences. And that criminal justice reform needs good messengers to be successful. She referenced the Vera Institute of Justice as an organization that provides good information regarding social justice reform.
Posted by Pamela Cravez at 5/17/2018 11:57:00 AM

Author Scott Turow on Alaska Bar Convention panel: "What to do when you believe your client wants to lie on the stand"

Scott Turow, author of  more than a dozen books, some of which have been turned into movies, responded to questions about how he would handle a client he believed wanted to lie on the stand, at the 2018 Alaska Bar Convention last week.

Jeff Feldman, a well-known and respected defense attorney, and affiliate professor of law at the University of Washington School of Law, moderated the ethics discussion.

Feldman pointed out that the governing case law goes back to 1986. Nix v. Whiteside, 475 U.S. 157 (1986), provides that a defendant's right to counsel does not include the right to counsel who will cooperate with the defendant in presenting perjury.

The Alaska Rules of Professional Conduct (Rule 3.3) require that an attorney not knowingly make a false statement to the court of material fact. The commentary to the rule, though, states that a lawyer's ethical duty may be qualified by a criminal defendant's due process and right to counsel.

Feldman gave the panelists a hypothetical client accused of murder, who, when arrested, had gun residue on his hands and told the police "The dirt bag deserved to die."

"In your first interview with your client will you ask, 'Did you do it?'" Feldman asked.

"My usual practice is not to be quite that direct," Turow responded.

The attorney client relationship is very important, issues of trust have to develop, Strout said, agreeing that she would not ask the question.

Turow added that he would lay out his obligation regarding perjury in the first meeting with his client. "I know you wouldn't do this," he'd preface the conversation. Then he'd let his client know that if he told him something at the start, then changed to something different -- that Turow knew to be a lie -- he wouldn't be able to present the lie to the court if it materially impacted the case.

Feldman pitched a number of scenarios to the panelists to tease out the important issues of both knowing a person is lying and that the lie is material to the case.

It's not uncommon for traumatic events to change memories, Strout said, when faced with a hypothetical client who remembered seeing a gun after hearing that would make his defense  stronger. It's not the role of the criminal defense attorney to second guess this, she added.

If Turow doesn't have a reason to believe 'beyond a reasonable doubt' that his client is lying, then the client has a right to tell the story, he said. Strout's level is whether she 'actually knows' that her client is lying.

Both standards fit within the ethical guidelines of 'knowingly,' according to Page.

Though the bar presentation involved only a discussion of the obligation of criminal defense attorneys, it was agreed that prosecutors and civil litigation attorneys also deal with this issue.

The Alaska Rules of Professional Conduct, however, single out a criminal defendant's right to counsel and to testify  as important qualifiers when it comes to an attorney's duty.
Posted by Pamela Cravez at 5/15/2018 03:05:00 PM

Congratulations to 2018 Justice Center grads from UAA Justice faculty!
Best wishes on all of your future endeavors!
Posted by Pamela Cravez at 5/07/2018 03:01:00 PM

Student Independent Study: "Locational Privacy in the data Age in Conflict with the Third-Party Doctrine"

Mark Turberville, Post-Baccalaureate in Paralegal Studies 2018, completed a semester-long independent study with Prof. Ryan Fortson with a a power point presentation on the third-party doctrine, a doctrine that is the subject of  Carpenter v. United States, currently before the United States Supreme Court. In addition to working with Prof. Fortson, Turberville received editorial support from Prof. Kristin Knudsen, Legal Studies Coordinator.

Turberville's paper, "Locational Privacy in the Data Age in Conflict with the Third-Party Doctrine," examines the interplay between an individual's right to be free from unlawful search and seizure as guaranteed by the Fourth Amendment of the U.S. Constitution and technological advances that are creating opportunities for collecting personal data unanticipated and unprotected by existing law. In particular, the ability of cell phone technology to gather locational data without the knowledge or consent of the holder of the cell phone.

Turberville traces the evolution of Fourth Amendment protections from the privacy of a person's home, to the privacy of the contents of posted letters, to the content of telephone communications, to the content of email communications, explaining how at each step courts have determined when a person's expectation of privacy is reasonable. In the 1970s, the courts made the delineation that when information is shared with a third party — such as a bank — there is no longer an expectation of privacy and that information may be obtained by police without a search warrant. Since the 1970s, when the third-party doctrine was established, technology has changed greatly and the breadth of information that has been allowed to be collected without full Fourth Amendment protections has also increased dramatically.

For instance, Turberville describes "pinging," where a government agent calls a target cell phone and hangs up without letting it ring. The "ping" allows the agent to collect cell site information and track the location of the phone, although the holder of the phone has taken no action.

Cell tower location information is routinely subpoenaed by law enforcement agencies, according to Turberville. And the volume is high — "From July 2015 to June 2016, for example, AT&T received 75,302 requests for cell phone location information." (p. 15).

But, as Turberville points out, the third-party doctrine is coming under fire from legal scholars and some state courts for leaving too much power in the hands of government. Eleven states have rejected the doctrine, and, based on comments in other decisions and Alaska constitutional protection of privacy, Turberville believes Alaska may reject the doctrine in the future.

In November 2017, the United States Supreme Court heard arguments in Carpenter v. United States, where the defense challenged the use of the third-party doctrine in the long-term surveillance involving smartphone data without a warrant. Data was transmitted and logged even when "location services" on the phone were turned off.

A decision is expected this summer. 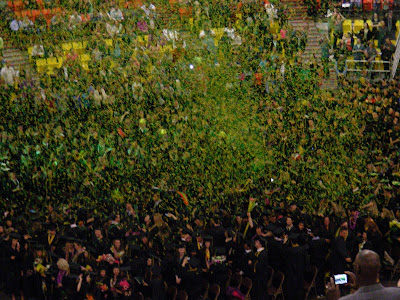 As we enter 2018 commencement weekend, join us in congratulating the 33 students who are receiving a degree or certificate in Justice Center programs.

Gilpin's paper, "The Mental Health and Substance Abuse Among Attorneys," investigates the relatively high prevalence of mental health issues and substance abuse among attorneys as compared to the general population, possible causes, and suggestions for improvement. She draws upon multiple studies, including one conducted by Patrick Krill in 2016.

Gilpin reports a correlation between the stress levels experienced during law school and during the practice of law that contribute to the likelihood of attorneys developing mental health issues and substance abuse disorders. Heavy course loads, competition, and lack of feedback from professors, she writes, are some of the reasons for stress in law school. Dissatisfaction with the practice of law, case overloads, and pressure to specialize are reasons Gilpin cites for stress among practicing attorneys.

After presenting the problem, Gilpin discusses different avenues open to attorneys for addressing the issue. These include seeking treatment and participating in lawyer assistance programs, as well as promoting law firm policies that encourage treatment without endangering job status. Gilpin also suggests that creating a less stressful environment in law school and better communication between students and professors could also reduce the incidence of mental health and substance use disorders among attorneys.