On Thursday, March 1, the Society of Law and Justice welcomes Rashika Rakibullah, lead organizer for the American Civil Liberties Union of Alaska, as guest speaker at their general meeting. Rakibullah will talk about her job and how she has come to this field of work. The meeting begins at 6p.m. in SSB 118 and is open to the public.

Other events being planned include:

Even as prison populations decline, women in prison fare worse than men

"Women have become the fastest growing segment of the incarcerated population nationally," according to a new report from the Prison Policy Initiative. Even as prison populations decline, the impact on women is uneven, with women faring worse than men in 35 states, including Alaska. "The Gender Divide: Tracking women's state prison growth," by Wendy Sawyer (2018), shows both national trends and state-to-state variation. The report also looks at how incarcerated women differ from men, including that they are "more likely to enter prison with a history of abuse, trauma and mental health problems." And while in prison they are "more likely than men to experience serious psychological distress."
Posted by Pamela Cravez at 2/27/2018 02:46:00 PM 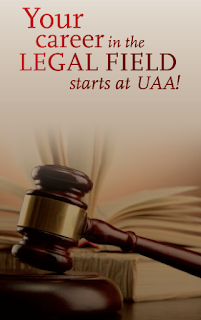 According to the ABA, "approved programs have demonstrated their high quality education to the lawyers and paralegals in their legal communities."

2018 marks the 26th anniversary of ABA approval of UAA's program. Approval is awarded after a rigorous application and assessment process, followed by a thorough site visit by members of the Standing Committee on Paralegals.

The mission of the ABA Standing Committee on Paralegals is to improve the American system of justice by establishing ABA standards for the education of paralegals and by promoting attorneys' professional, effective and ethical utilization of paralegals.

UAA Legal Studies Program graduates can be found working in law firms, state and federal agencies, corporate legal departments, the courts, Native corporations, and the private business sector, contributing to the justice system on the local, state, and federal levels.

Police departments serving cities throughout the country with populations exceeding 25,000, employed an average of 16.8 officers for every 10,000 residents in 2016. The Anchorage Police Department employed 11.9 officers per 10,000 residents, according to the 2016 FBI Uniform Crime Reporting program. However, police association groups and research published by the U.S. Department of Justice support using performance objectives that include workload measures, among other criteria, as a better guide to staffing decisions than officers per capita. In fact, there are no national standards for how many officers a department should have per capita, according to Police Employment, Officers Per Capita Rates for U.S. Cities, Governing, The States and Localities. The article in Governing provides an overview of police staffing throughout the country and links to recommendations for determining staffing levels.

Read about police staffing in the Fall 2017 Alaska Justice Forum:
"How do you determine the right size of a police department? Don't look to crime rates," by Troy C. Payne

The most recent survey of criminal history information systems throughout the country shows that there is one day or less elapsed time between issuance of a protective order in the Alaska Court System and entry into the state file. This is similar to 20 other states, with the rest taking longer. Entry onto the National Crime Information Center (NCIC) File takes longer, 2–7 days, which puts Alaska slower than 19 other states and among the 13 states and Guam that take this amount of time.

Tracking of Alaska's criminal information systems and those throughout the country — including fingerprints, criminal warrants and disposition of cases — is covered in the newly released "Survey of State Criminal History Information Systems, 2016." This is the fourteenth survey since 1989 conducted by SEARCH, The National Consortium for Justice Information and Statistics, with funding from the Bureau of Justice Statistics.

Authors of the newly released report caution comparing statistics from year to year due to the impact of fiscal constraints and other factors on state information systems. While Alaska has timely posting, within a day or less, of warrants on the state and NCIC Wanted Person file, it does not retain tracking information on criminal history records to show case status through the criminal justice process and does not post indictment information to the criminal history record. Final case disposition is posted.  Elapsed time between the occurrence of a felony court case disposition and its receipt by the repository is 2-7 days.

Alaska is one of 26 states that do not provide web-based noncriminal justice background checks to the public.

Finally, the report indicates that Alaska has plans to replace it's computerized criminal history systems between 2019 and 2021. The cost is yet to be determined. 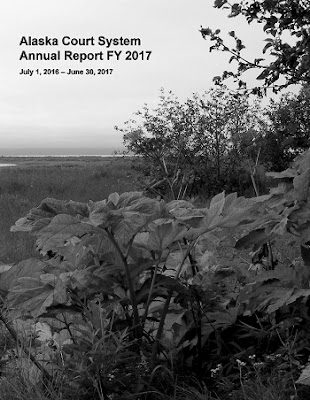 This is the sixth year that Melissa S. Green, Justice Center publication specialist, has worked with Antonia Moras, project coordinator for the court system and former editor of the Alaska Justice Forum, to produce the report. Ms. Green collaborated on design, did layout and compositing of text, statistical tables, maps, and photographs for both the annual report and a more abbreviated Profile of the Alaska Court System 2018.

Ms. Green also collaborated with Ms. Moras on a major redesign of the report in FY 2012.

Beginning January 1, Alaska courts began receiving information from a pretrial risk assessment tool to assist in bail decisions. The goal is to improve public safety by reducing the number of defendants who fail to appear for trial or commit a new crime while out on bail. Read about it in the Winter 2018 Alaska Justice Forum.

"We are all extremely fortunate to have such a talented leader for the Justice Center," Dean Jessee said. "He is deeply committed to the Justice Center's mission of leading Alaska toward a safer, healthier and more just society."

Dr. Myrstol received his Ph.D. in Criminal Justice from Indiana University in 2006. He has served as the principal or co-principal investigator on a variety of Alaska justice topics including the offending trajectories of juveniles, the criminal case processing of domestic violence, sexual assault and sexual abuse of a minor cases, the role and impact of Alaska’s Village Public Safety Officer (VPSO) program on the state’s response to domestic violence and sexual assault, sex offender recidivism trajectories, sexual violence victimization among university students, the structure and organization of policing in Alaska, as well as factors impacting charging, time-to-disposition, and sentencing outcomes in felony cases.

Dr. Myrstol is currently the principal investigator on Alaska's Results First Initiative, a partnership with the Pew-MacArthur Trust that provides analysis of evidence-based programs giving policymakers  a tool to better understand the relationship between the state’s monetary investment in programs and the return on that investment in terms of the benefits of reduced recidivism. 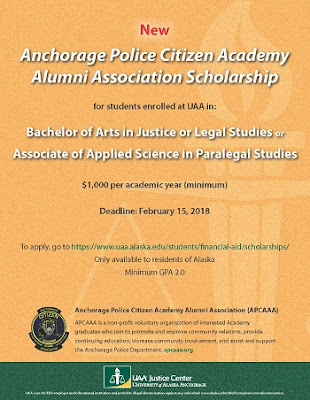 New Anchorage Police Citizen Academy Alumni Association Scholarship for students enrolled at UAA in Bachelor of Arts in Justice or Legal Studies or Associate of Applied Science in Paralegal Studies. $1,000 per academic year (minimum) is now available. Students must be residents of Alaska and have a 2.0 GPA. The deadline for applying is February 15, 2018. Go to https://www.uaa.alaska.edu/students/financial-aid/scholarships/

Prof. Ryan Fortson, Justice faculty, explained to KTVA reporter Liz Raines that Alaska legislators have immunity from prosecution for actions related to their legislative duties. For instance, he said, they have immunity from defamation for statements they may make during the legislative session.  But this immunity probably would not extend to actions such as those alleged against Rep. Zach Fansler,  Fortson added. Fansler has been accused of assaulting a woman in Juneau.