The Justice Center held its annual reception for university and community partners on April 13, 2010 in the UAA/APU Consortium Library Atrium. The event provided the opportunity to meet and thank the many individuals, agencies, and organizations with whom the Justice Center works.

Below is a slideshow of photos taken at the reception by Barbara Armstrong and Melissa Green.

The Alaska Native Justice Center (ANJC) is a private, non-profit 501(c) (3) corporation created in 1993 to address Alaska Natives' unmet needs regarding the Alaskan civil and criminal justice system. Their mission is to promote justice through culturally based advocacy, prevention, and intervention initiatives to restore dignity, respect, and humanity to all Alaska Natives.
Posted by Barbara Armstrong at 4/26/2010 08:10:00 AM 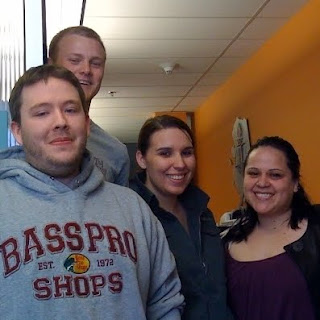 Each of these studies explores social capital and community connectedness. (Social capital refers to the level of collaboration and cooperation in a community, as seen in shared trust, values, and understanding.) The projects provided these students with invaluable real-world research experiences spanning each stage of the research process. Over the course of the semester the team learned about sampling, executed multiple mailings (including pre-notification letters, cover letters, questionnaires, as well as follow-up postcards and questionnaires), entered and cleaned both quantitative and qualitative data, and performed descriptive data analyses.

Through his grant funding, Dr. Myrstol was able to offer each student a scholarship for the 3-4 upper division Justice credits they earned. The final reports for these studies will be published in October 2010.

Dr. Allan Barnes, Justice faculty, has been elected to serve as the College of Health and Social Welfare representative on the Faculty Senate Academic Assessment Committee.

The Academic Assessment Committee assists the Faculty Senate in reviewing academic assessment policies and processes. The committee is primarily responsible for developing, maintaining, and applying the UAA Assessment Handbook; developing institutional student learning outcomes assessments; directing collection and analysis of outcomes data; and reviewing all assessment policies.
Posted by Barbara Armstrong at 4/26/2010 08:05:00 AM

The College of Health and Social Welfare (CHSW) Diversity Committee web page has recently gone live as part of a redesign of the college website, a project coordinated by Associate Dean Susan Kaplan. Prof. Deb Periman, Justice faculty and co-chair of the Diversity Committee, announced the new web page at the recent CHSW All College meeting. The web page contains information on faculty recruitment, faculty resources, readings in diversity, and grant funding.

The Diversity Committee includes a student representative, and meets the third Friday of every month.
Posted by Barbara Armstrong at 4/26/2010 08:00:00 AM

Final examinations for Spring 2010 semester will be held April 27 - May 1. The Justice Center examination schedule is now available online, showing day/date, time, and location of exams for Justice and Paralegal courses.
Posted by UAA Justice Center at 4/21/2010 08:06:00 AM

Dr. Sharon Chamard, Justice Center faculty, has been accepted to Take Wing Alaska, a cross cultural immersion experience. During summer 2010, she and other UAA faculty will attend Alaska Native culture camps to gain cultural awareness and insight to Alaska Native peoples, their culture, and their ways of teaching, learning, and living.

This program is part of the Alaska Humanities Forum. The primary mission of Take Wing Alaska is to assist Alaska Native youth in transitioning to urban secondary education, with the long-term vision for them to return home and contribute to their community. In addition, the program provides a cross cultural immersion experience for educators. UAA is a partner with Take Wing Alaska.
Posted by Barbara Armstrong at 4/19/2010 08:01:00 AM

Dr. Marny Rivera, Justice faculty, has been appointed to the UA Behavioral Health Alliance. The Behavioral Health Alliance (BHA) is a statewide University of Alaska inter-disciplinary task group formed to identify issues concerning behavioral health programs in the UA system and to work collaboratively to enhance communication, coordination, and collaboration between and within academic disciplines.
Posted by Barbara Armstrong at 4/19/2010 08:00:00 AM

The Justice Center will holds its annual reception for University and community partners on Tuesday, April 13, 4:30–6:30 p.m. in the Consortium Library, LIB 307, 3rd floor. Parking is available in the Library main parking lot and in the parking garage next to the Social Sciences Building (SSB). See campus map.

Prof. Kelley speaks on caring for aging parents from a long distance

Prof. Kelley has written a resource manual for long-distance caregivers in the UAA community, and will present her materials from a lawyer and caregiver's perspective. Topics include critical legal documents, family medical leave, care coordination, professional services available, troubleshooting Medicare coverage questions and appeals, housing alternatives, and the latest changes in the Patient Protection and Affordable Care Act of 2010 (health care reform).
Posted by Barbara Armstrong at 4/12/2010 08:09:00 AM 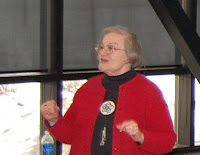 Dr. Marny Rivera, Justice faculty, was a member of the UAA Against Domestic Violence panel held April 7, 2010 at the UAA Campus Center. This event was well-attended by faculty, staff, and students and covered a range of issues including warning signs in a relationship, personal safety, legal protections, domestic violence research, and campus and local resources. The event was opened by Chancellor Fran Ulmer and moderated by Judge Karen Hunt (ret.), Anchorage Superior Court.

Justice Center research on domestic violence can be found on our website.
Posted by Barbara Armstrong at 4/12/2010 08:05:00 AM 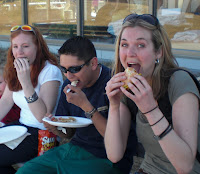 Justice Center faculty and staff will hold the annual Student Appreciation Barbecue on Saturday, May 1, 2010 from 12 noon - 2:00 p.m. at Kincaid Park Chalet. Justice students and a guest are invited. Please RSVP to Melissa Huenefeld at anmch1@uaa.alaska.edu or 786-1810.

The Winter 2010 issue of the Alaska Justice Forum is now available. The 12-page issue includes the following articles:


"Felon Disenfranchisement and the Voting Rights Act — Farrakhan V. Gregoire: 'A Crowd of One'" by Deborah Periman

Early this year, the U.S. Court of Appeals for the Ninth Circuit issued its opinion in Farrakhan v. Gregoire, a challenge to Washington State’s felon disenfranchisement law. The court’s decision stands alone among the circuits in holding that state law denying felons the right to vote is a violation of section 2 of the Voting Rights Act, where discrimination in the state’s criminal justice system results in race-based denial of the vote. Despite speculation, suggestions that the Farrakhan decision signals the demise of Alaska’s disenfranchisement law are overstated. Nevertheless, the case is noteworthy for reopening the conversation about why we deny certain offenders the right to vote, and whether these laws reflect viable public policy or are simply relics of an era in which racial and class prejudices limited participation in the political process.

This article provides results of a recent Justice Center study of juvenile probation officer (JPO) workloads and caseloads in the Alaska Division of Juvenile Justice (DJJ), which examined the resources required in both rural and urban Alaska to adequately meet minimum probation standards, to continue the development and enhancement of system improvements, and to fully implement DJJ's restorative justice field probation service delivery model.

At the end of 2009, a total of 5,285 institutionalized offenders under the supervision of the Alaska Department of Corrections (DOC), a 5 percent increase in incacerated offenders from 2008, according to the DOC's 2009 offender profile. About 26 of the offender population was Alaska Natives and just over 10 percent was Black — disproportionate to their percentages in the general population (16% and 4%, respectively). The web version of this article includes an additional table which could not be included in the print edition for reasons of space.

Figures recently released by the U.S. Bureau of Justice Statistics show that prisoners under federal and state jurisdiction at year-end 2008 numbered 1,610,446. Inmates under local jurisdiction represented an additional 785,556 individuals, for a combined total of 2,304,115 incarcerated individuals. The imprisonment rate for males was 15 times higher than for females, and 6.5 times higher for Black males than for White males. The United States continues to lead all other nations in the rate of reported incarceration of individuals per 100,000 of the general population. The U.S. rate of 754 inmates per 100,000 residents is 5 to 10 times higher than that of Canada and most of the industrialized democracies of Western Europe.

"The Language Interpreter Center and Interpretation in Alaska"

The Language Interpreter Center (LIC), an Alaska multi-agency collaboration, now has a pool of 115 trained interpreters speaking 36 languages. The LIC works in cooperation with its many partners to meet the need for qualified interpreters in legal, medical, social services, and educational settings statewide. The web version of this article includes an additional figure and table which could not be included in the print edition for reasons of space.

Coordinated and staffed by the Alaska Judicial Council, the Criminal Justice Working Group (CJWG) is made up of representatives from the executive branch justice agencies and other justice system agencies and organizations in Alaska. The CWCG has focused on two main aspects of the criminal justice system: crime prevention and reduction of recidivism; and efficiencies in the system. This article outlines the CJWG's recent work and accomplishments: electronic exchange of discovery information among agencies; offender re-entry programs; Project HOPE, a successful probation monitoring program developed in Hawaii; and ongoing analysis of recidivism and program effectiveness.

Every day, the Anchorage Superior court handles five petitions — over 100 per month — to revoke probation for technical reasons such as failed drug tests and missed appointments. Project HOPE in Hawaii is an evidence-based program that reduced revocation rates and re-arrests of participating offenders. The Alaska Department of Corrections, in collaboration with the Criminal Justice Working Group, is developing a pilot program in Alaska based on the Project HOPE model.

The Justice Center has completed a new study of juvenile probation officer workloads and caseloads. Juvenile Probation Officer Workload and Caseload Study: Alaska Division of Juvenile Justice by André B. Rosay and Thomas S. Begich, describes results of a study to measure and analyze the workload and caseload of Juvenile Probation Officers (JPOs) within the Alaska Division of Juvenile Justice. More specifically, this study assessed the resources needed in both rural and urban Alaska to adequately meet minimum probation standards, to continue the development and enhancement of system improvements, and to fully implement the restorative justice field probation service delivery model. 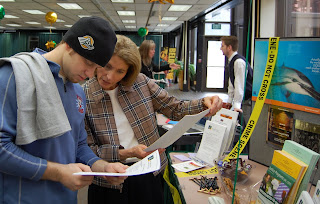 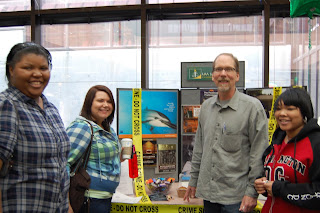 The Justice Center participated in the Majors Fair held April 1 in the UAA Campus Center. Justice Center faculty and staff talked to students about the Justice major/minor, the Paralegal Studies Certificate Program, and careers in the Justice field. This year's exhibit included panels of photographs and a PowerPoint slide show.

Fifteen Justice majors were inducted into the Alpha Phi Sigma national criminal justice honor society, UAA Omega Xi Chapter, on Wednesday, March 31 at the Justice Center. Dr. Marny Rivera, Justice Center chapter faculty advisor, presided over the ceremony which included presentation of the Alpha Phi pin and a framed certificate. A reception followed the ceremony. To be selected for Alpha Phi, students must maintain a 3.2 GPA in their Justice major and in their minor. 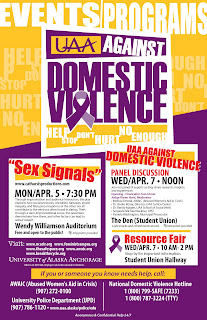 Dr. Marny Rivera, Justice Center faculty, will speak about domestic violence issues as part of a panel on Wednesday, April 7, 12 noon - 1:30 p.m. in The Den, UAA Student Union. This program is presented by UAA against Domestic Violence. Chancellor Fran Ulmer will open the session, and Judge Karen Hunt (Ret.), Anchorage Superior Court, will moderate the event.

Light snacks and refreshments will be served. A resource fair will also be held from 1:00 - 2:00 p.m. in the Student Union Hallway.

Justice Center research on domestic violence issues can be found on the Justice Center website.
Posted by Barbara Armstrong at 4/05/2010 09:00:00 AM

Joe Masters, Commissioner for the Alaska Department of Public Safety, and Dr. André Rosay, Justice Center Director, will co-present at the National Criminal Justice Association Western Regional Meeting on Evidence Based Policy and Practice in Action, April 7, 2010 in Phoenix. They will highlight how partnerships between researchers and practitioners can influence public policy and practice. Their discussion will focus on how they collaborated to influence Alaska Governor Sean Parnell’s initiative to end the epidemic of sexual assault and domestic violence and to make Alaska the national leader in fighting these scourges.

Their presentation is available on the Justice Center Web Site: