Wendi Jobe Shackelford, B.A. Justice, '94, played on the UAA women's basketball team and  received the 1993 award for most improved. She also received the Dresser Cup for having the highest GPA of any student athlete, male or female. Her undergraduate years at UAA, though, were just a warm up for the years of achievement that have followed.

After graduating, Shackelford joined the Anchorage Police Department, becoming the fifth generation in her family to enter law enforcement. Her father, maternal grandfather, maternal great grandfather and maternal great, great grandfather have all been police officers. She was one of the first dozen School Resource Officers to go into the Anchorage School District schools, stationed at Chugiak High School from May 2003 to June 2013. She was also among the first patrol officers to be trained in crisis response and supported the development of APD's Crisis Intervention Team (CIT).

CIT is a collaborative approach, employing partnerships between law enforcement, the community, mental health providers, individuals with mental illness, their family, and advocates to address the needs of persons with mental illness in a way that emphasizes treatment for nuisance crimes, rather than jail.

From 2001 to 2013, Shackelford served as coordinator of APD's Crisis Intervention Team in addition to her duties as a patrol officer. In 2013, after showing her superiors that CIT coordination was a full-time job, the position of full-time coordinator was created and she held it until her retirement in 2015.

In 2005, Shackelford received the APD officer of the quarter. She also became a YWCA Woman of Distinction that year, the first police officer to be recognized. In 2008, the APD CIT, under Shackelford's coordination, received the Governor's Award recognizing a civic organization that has done the most to improve the potential of people with disabilities.

Shackelford is now back at UAA, where she's become a member of the Center for Human Development (CHD) Alaska Training Cooperative. She continues to use her knowledge and experience to train  law enforcement, emergency, and medical first responders in crisis intervention as well as mental health first aid. She is helping to provide the training for a new CIT Coalition in Mat-Su Borough.(See Fall 2017 Alaska Justice Forum) as well as serving as coordinator of Youth Mental Health First Aid training.

And, since July 2016, Shackelford has held a public seat on the executive board of the Alaska Police Standards Council. She is confirmed by the Alaska Legislature to serve through 2021.
Posted by Pamela Cravez at 10/30/2017 09:38:00 AM 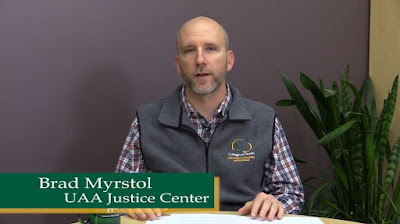 This is the first in a series of short videos to help everyday people interpret basic crime statistics. In this video, data on rates of larceny theft in Alaska for 1985–2016 are used to demonstrate the importance of time in analyzing whether crime is trending upward, trending downward, or remaining flat.

See the video and transcript.

Alaska Justice Forum supplement: Is the rate of property crime increasing in Alaska? 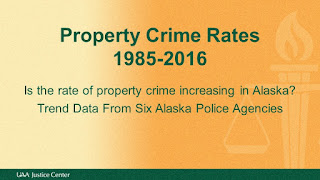 Dr. Brad Myrstol, interim Justice Center director and director of the Alaska Justice Information Center, developed a series of graphs using data from six Alaska jurisdictions to show the complexity of determining whether property crime is increasing in Alaska. The video presentation and transcript are new additions to the online version of the Fall 2017 Alaska Justice Forum.  Sign up to receive the Alaska Justice Forum.
Posted by Pamela Cravez at 10/23/2017 05:35:00 PM

Anchorage Superior Court Judge Jennifer Henderson spoke at the general meeting of the the Society of Law and Justice on Thursday, Oct. 19. Gov. Walker appointed Henderson to the Superior Court in May 2017. A 2001 Yale Law School graduate, she had served as a District Court judge in Anchorage since 2013. Prior to being appointed to the bench, Judge Henderson clerked for Alaska Supreme Court Justice Warren Matthews and Ninth Circuit Court of Appeals Judge Kim McLane Wardlaw. She served as assistant district attorney in Anchorage and practiced with the law firm of Farley & Graves.
Posted by Pamela Cravez at 10/20/2017 09:18:00 AM 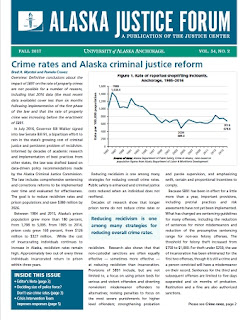 Dr. Brad Myrstol, interim Justice Center director, spoke with members of the House Judiciary Committee on Oct. 16, about crime rates in Alaska, specifically presenting monthly crime rate information for 2014, 2015, and 2016. Rep. Matt Claman, chair of the House Judiciary Committee, stated the purpose of the meeting as gathering information prior to the start of a special session called for next week by Gov. Walker to work on SB54. SB54 is a bill which would amend portions of SB91, a criminal justice reform law that passed in July 2016. Dr. Myrstol provided the committee the latest information available regarding monthly
crime rates both before and after passage of SB91. Find a copy of Dr. Myrstol's presentation here:

Periman talks with students at Color of Justice

Deb Periman, Justice faculty, along with Prof. Terry Price from the University of Washington School of Law, spoke with nearly 100 Alaska high school students  about what lawyers and judges do. Their conversation was part of  the two-day 2017 Color of Justice Program held in Anchorage Oct. 5 & 6. The Color of Justice is designed to encourage students to consider a career in law and also to increase the diversity in the legal profession and judiciary. 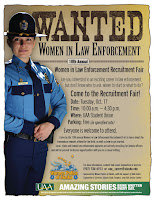 Check out upcoming career fairs including the 2017 UAA Fall Career Fair, Thursday, October 12, 9a.m. to 2p.m. in the Student Union. Dress professionally and bring your resume. On Friday October, 13, 2:30-3:30p.m, learn about internship and career opportunities with the CIA. Preregister here.

Next Tuesday, Oct. 17,  local, state, and federal law enforcement agencies will be recruiting at UAA in the Student Union from 10a.m. - 4:30p.m. during the Women in Law Enforcement Recruitment Fair. Sponsored by Women Police of Alaska with support from the UAA Justice Center,  the Recruitment Fair is open to the public and offers an opportunity to talk with female officers about opportunities in law enforcement.
Posted by Pamela Cravez at 10/10/2017 01:47:00 PM

Students are invited to a general meeting of the UAA Society of Law & Justice, Thursday October 5,  at 5:45 p.m. in SSB 118. If you think you may be interested in joining the club and want to learn more, drop by for pizza and soda and a chance to hear Blake Quackenbush talk about what it's like to practice family law.
Posted by Pamela Cravez at 10/03/2017 04:15:00 PM

Dr. Sharon Chamard, Justice Center faculty, became UAA Faculty Senate President in May and was recently appointed chair of the UAA Chancellor search committee. In her role as Faculty Senate President, Charmard presides over a monthly forum and a committee structure that  addresses university-life issues (curriculum, student success, institutional organization, and professional development) and represents the Faculty Senate as part of UAA shared governance on a variety of groups, including the Council of Deans and Directors, Faculty Alliance, and University Assembly. 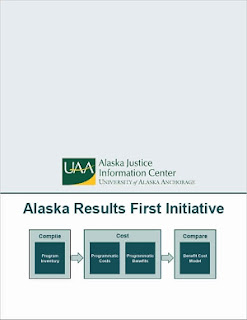 The Alaska Results First Initiative, a new report from the Alaska Justice Information Center (AJiC) at the Justice Center, shows that most of Alaska's evidence-based adult criminal justice programs are showing positive return on state investment of money. Notably, all but one of those programs are shown to measurably reduce recidivism (the likelihood that an inmate will re-offend when released), which not only improves public safety, but saves the state the costs associated with criminal activity.  Learn more.
Posted by Pamela Cravez at 10/02/2017 01:58:00 PM