Save the date! Pizza party for Justice & Paralegal students on September 20


Drop in for pizza and beverages and meet your advisors, professors,
and fellow students!

The basis for the interview was Dr. Myrstol's  Fall 2010 Alaska Justice Forum article, "Police in Schools: Public Perceptions"  which provides a history of School Resource Officers (SROs) — certified, sworn police officers who are employed by a local police agency but are assigned to work in local schools — and presents results of public perceptions of SROs in Anchorage School District schools based on questions in the 2009 Anchorage Community Survey.
Posted by Barbara Armstrong at 8/29/2011 12:06:00 PM 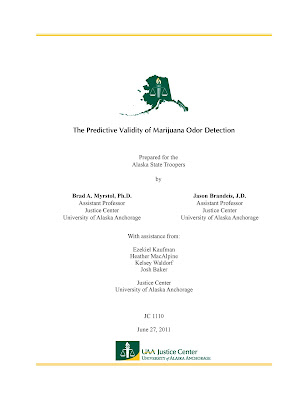 The study includes an overview of the legal status of marijuana by Prof. Brandeis and an analysis of data by Dr. Myrstol from over 200 marijuana grow searches conducted by AST during the calendar years 2006, 2007, and 2008. Marijuana was found and seized in 98.5% of the cases reviewed.

Details of the project are available on the Justice Center website.

Prof. Brandeis teaches courses on American government, constitutional law and civil liberties, and is a frequent speaker on constitutional law and other legal issues. Prof. Brandeis also maintains a private law practice through which, subsequent to the date of the writing and release of this report, he provided legal representation in administrative agency proceedings for the Campaign to Regulate Marijuana Like Alcohol in Alaska.
Posted by Barbara Armstrong at 8/25/2011 02:47:00 PM

This year's Campus Kick-off features food, information booths, prizes, and live entertainment. Comedian Nick Thune performs at the Wendy Williamson at 7:15 p.m., and don't miss the walk-in movie at 9:00 p.m. on the south lawn of the Wells Fargo Sports Complex. See you there!

Dr. Randy Magen, School of Social Work, and Prof. Deb Periman, Justice Center faculty, outlined the "Making Learning Visible" (MLV) project for the UAA College of Business &amp; Public Policy faculty in-service on August 19.  The goal of the MLV project is to provide resources and a supportive community of colleagues to faculty as they strive to self-evaluate and improve their teaching skills.  "Making Learning Visible" is coordinated by the Center for Advancing Faculty Excellence (CAFE). 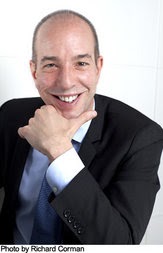 National Executive Director of the ACLU Anthony Romero's presentation on July 14 at the Wendy Williamson, "Disparate Opportunity in America: The Ongoing Struggle for Equal Rights,"  is being podcast on KSKA "Addressing Alaskans"  at 2:00 p.m. and 7:00 p.m. today, Thursday, August 18.

Mr. Romero's presentation highlights the ongoing struggle for equal rights and opportunity in America, the continuing challenges faced by minority and underprivileged communities, and the work of the ACLU in fighting for equal rights.

The live event was co-sponsored by the UAA Justice Center, the ACLU of Alaska, and other University and community partners.
Posted by Barbara Armstrong at 8/18/2011 02:25:00 PM


Prof. Deb Periman, Justice faculty, participated in the day-long new UAA  faculty orientation on August 15.   Dr. Elizabeth Predeger of the School of Nursing, Dr. Randy Magen of the School of Social Work, and Prof. Periman outlined details of activities of the "Making Learning Visible" Project for the upcoming academic year. These include the Café Best Practices Series, Course/Teaching Portfolio Development, and  the Book Group which is focusing on the text, "Inquiring into the College Classroom: A Journey Toward Scholarly Teaching." The goal of this project is to provide resources and a supportive community of colleagues to faculty as they strive to self-evaluate and improve their teaching skills.

Prof. Periman also described the "UAA/APU Books of the Year" program, part of the Ford Foundation Difficult Dialogues Project.  The program encourages faculty to integrate into their curriculum books selected for their relevance and timeliness. The Big Short by Michael Lewis and The Working Poor by David K. Shipler were selected by a faculty committee for the 2011 through 2013 academic years.  The program's website provides faculty with materials and ideas for weaving themes from the books into their classes and creating a community conversation. 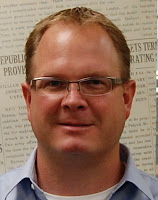 Dr. Cory R. Lepage has joined the faculty of the Justice Center as an Assistant Professor.  He received his Ph.D. in sociology from the University of California, Riverside, and his M.S. in criminal justice from California State University, Long Beach. His areas of emphasis are courts, sociology of law, criminological theory, and research methods and analysis.  Most recently, Dr. Lepage has conducted research on justice of the peace courts in the U.S. and Canada and on dual diagnosis courts.

Dr. Myrstol selected for leadership positions on NeighborWorks Anchorage board of directors

Dr. Brad Myrstol, Justice faculty, was recently elected Secretary of the NeighborWorks® Anchorage Board of Directors, and was also selected to be Chair of the Committee on Community Engagement and Resident Services.

In his capacity as secretary of the Anchorage board, he attended the August 8-11, 2011 NeighborWorks America Training Institute on community and neighborhood revitalization which was held in Atlanta.  He will also be participating in the September 2011 Board Leadership Forum for the Pacific District of NeighborWorks America in Portland.  During the conference, Dr. Myrstol will visit Central City Concern (CCC), a nonprofit agency  founded in 1979, which serves single adults and families in the Portland area who are impacted by homelessness, poverty, and addiction. CCC offers a continuum of affordable housing options integrated with direct social services, including healthcare, recovery, and employment.

NeighborWorks America is the country’s preeminent leader in affordable housing and community development. NeighborWorks® Anchorage is part of the nationwide network of nonprofits affiliated with NeighborWorks America, and  is dedicated to improving the quality of life for families and individuals by preserving homes, creating new housing opportunities and strengthening neighborhoods.
Posted by Barbara Armstrong at 8/16/2011 09:20:00 AM

Prof. Jason Bradeis, J.D., Justice faculty, attended the 2011 Law and Society Association annual meeting in San Francisco in June.  This multi-disciplinary event brings together scholars from around the world to discuss  the place of law in social, political, economic, and cultural life.  Participants bring training from a variety of  backgrounds including law, sociology, political science, psychology, anthropology, economics, and history, as well as other areas related to the study of socio-legal phenomena. The association publishes the Law & Society Review, sponsors annual conferences and educational workshops, and fosters the development of academic programs in law and society around the world.
Posted by Barbara Armstrong at 8/15/2011 02:01:00 PM

Dr. Sharon Chamard, Justice Center faculty, was elected on August 10, 2011 to the office of chair of the Municipality of Anchorage’s Public Safety Advisory Commission (PSAC).  This nine-member body advises the mayor and Anchorage Assembly on public safety issues of concern to the citizens of the Municipality.   Dr. Chamard has been on the PSAC since 2006, and has served as vice-chair since 2008.
Posted by Barbara Armstrong at 8/15/2011 01:59:00 PM

DDACTS involves the use of geo-mapping to identify areas that have high incidence of crime and crashes, and to determine effective and efficient means for deploying law enforcement and other resources based on this data.  The goal of DDACTS is to reduce the incidence of crime, crashes, and traffic violations across the nation.  This program is supported by the National Highway Traffic Safety Administration, the Bureau of Justice, and the National Institute of Justice.

The APD crime map shown is an example of how geo-mapping uses color to indicate density of crimes; in this instance, red equals a high value and denotes a high density of person crimes in particular areas of Anchorage in June 2011.
Posted by Barbara Armstrong at 8/12/2011 04:34:00 PM

Kelly Howell, B.A., Justice '92, was recently appointed the Special Assistant to Alaska Department of Public Safety (DPS) Commissioner Joe Masters. One of her major roles is as legislative liaison for DPS, and Kelly will be reviewing and drafting proposed legislation, evaluating and drafting regulations, and meeting with members of the legislature.  In addition, she serves as the liaison to the Office of the Governor Sean Parnell and will be continue to be involved in the Governor’s Initiative to end the epidemic of sexual assault and domestic violence in Alaska.  Most recently, Kelly was the domestic violence and sexual assault services coordinator for the Alaska State Troopers and traveled statewide training first responders, working with victim services providers, and assisting with policy development.
Posted by Barbara Armstrong at 8/08/2011 04:37:00 PM

His presentation titled, "Criminogenic Features of Apartment Complexes: A Preliminary Case Control Study,"  was co-authored with Heidi L. Scherer of Kennesaw State University and John E. Eck of the University of Cincinnati.  This study used epidemiological methods to compare high crime apartment complexes to low crime apartment complexes along multiple dimensions, including management practices and the immediate spatial context of the complexes.

ECCA is an annual, invitation-only symposium attended by an international group of researchers and practitioners engaged in situational crime prevention, intelligence-led policing, and problem-oriented policing. This year's ECCA was hosted by the Built Environment Unit of the Council for Scientific and Industrial Research (CSIR) and co-sponsored by the eThekwini Municipality of South Africa.

In 2008, the Justice Center hosted the 17th annual ECCA Symposium on the UAA campus.

Alan McKelvie, Director of the Alaska Justice Statistical Analysis Center (SAC), has received a grant from the Bureau of Justice Statistics for FY2011-2012 under the State Justice Statistics Program for Statistical Analysis Centers.  With this award, Mr. McKelvie will be upgrading and expanding the Justice Information Exchange Model that is located at the SAC.  Key improvements will include import/export capabilities, information exchange package documentation, and security settings. This library of standardized information exchange packages project was begun in FY2009-2010.

The standardized information exchange packages will include data such as incident reports, criminal intakes and dispositions, booking forms, criminal fingerprint cards, citation forms, and criminal complaints, and will be made available to criminal justice agencies statewide through the SAC website. 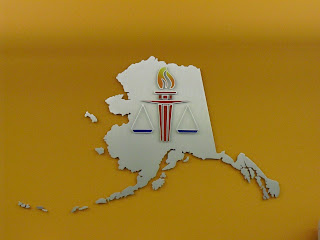 The Justice Center congratulates Justice and Paralegal Studies majors named to the Chancellor's and Dean's Lists for Spring 2011.

This workshop was developed by the National Crime Prevention Council to highlight how CPTED can be used to reduce crime in given areas through design and use of buildings, public spaces, landscaping, barriers, and lighting.