Results from the Teens Acting Against Violence (TAAV) program evaluation conducted by the UAA Justice Center in partnership with the Tundra Women's Coalition (TWC) were highlighted in an article in the Alaska Dispatch News recently.

Khristy Parker, Research Professional with the Justice Center, was a co-author of the evaluation and presented key findings in Bethel on October 23 at the Tundra Women's Coalition in Bethel.  Dr. André Rosay, Director of the UAA Justice Center; Eileen Arnold, Executive Director of TWC; and Michelle DeWitt, former TWC Executive Director, were also co-authors of the evaluation.

This week's profile is the third in our series about Justice alums working for the Alaska Division of Juvenile Justice (DJJ) at the McLaughlin Youth Center in Anchorage. This post highlights Steve Phimmasone.

Steve Phimmasone, BA Justice '05, is a Juvenile Probation Officer II with DJJ Anchorage Probation at McLaughlin Youth Center. He always wanted a career in law enforcement and while at UAA got an internship at McLaughlin. He started out as a counselor. Steve is keenly aware that decisions he makes while dealing with kids can impact their lives and help them. The age-crime curve peaks around the age of 18-19 years.  Steve notes that this is a critical period in a young person’s life — “That’s usually when an individual gets married or gets a career or becomes a career criminal.”  But Steve also knows the bottom line is “each individual will succeed or fail because of the decisions they make.”

One of the most challenging things he finds in his work is that there is something new – and often unexpected – every day. While thinking back on his justice education and what courses might help a student today considering a career in justice, Steve says, “The subject of justice falls into every academic department – any field. If someone wants to enter this career, social work, psychology, and sociology classes would help.”

Results from the Teens Acting Against Violence (TAAV) program evaluation conducted by the UAA Justice Center in partnership with the Tundra Women's Coalition (TWC) were presented in Bethel on Friday, October 23.

Michelle DeWitt spoke about the origins of the TAAV program and the importance of funding a program evaluation, both of which occurred during her tenure as executive director. Eileen Arnold spoke about the organic evolution of TAAV and the shift in the teen population that TAAV serves.

Teens Acting Against Violence (TAAV) is a student-led anti-violence education group that was formed in 1996 by the Tundra Women’s Coalition in Bethel.

The evaluation was two-pronged, focusing on the program effectiveness itself, and the short- and long-term benefits experienced by TAAV alumni over 18 years of age. Participants responded to questions on an online survey.  Overall the results of the evaluation were positive. Click here for the executive summary and key findings.

An event to celebrate the results of the study, as well as TAAV alumni, was held in Bethel on Saturday, October 24, at the Yupiit Piciryarait Cultural Center and featured testimonials from TAAV alumni.
Posted by Barbara Armstrong at 10/27/2015 09:12:00 AM

Karin Thomas received her M.S. in Criminology from the University of Pennsylvania and formerly worked for the New Mexico Statistical Analysis Center in the University of New Mexico Institute for Social Research. She has an intermediate proficiency in Russian, and has taught English as a second language (ESL) in Russia.

AJIC is jointly funded by the state of Alaska and the Alaska Mental Health Trust Authority and housed within the University of Alaska Anchorage Justice Center.
Posted by Barbara Armstrong at 10/27/2015 09:10:00 AM

Interested in conducting Justice or other research? Come to the undergraduate student research forum on October 28!

Dr. Troy Payne, Justice faculty, was interviewed recently by the Alaska Dispatch News about FBI crime statistics for Alaska.  The article reported on changes in crime rates from 2013 to 2014. Dr. Payne noted that "long-term data is more telling," and the bigger question is what 2015 data will tell us as we look at trends in crime rates.

This week's profile is the second in our series about Justice alums working for the Alaska Division of Juvenile Justice (DJJ) at the McLaughlin Youth Center in Anchorage. This post highlights Britney Olsen.

Britney Olsen, BA Justice '08, is a Juvenile Justice Officer III on the Transitional Services Unit at McLaughlin Youth Center (MYC). She got interested in criminology in high school, but developed a passion for working in the justice system when she settled on majoring in Justice at UAA. The best part of the job for her is “seeing youth making changes in their lives." And one of the biggest challenges is having enough time and resources with youth after their institutionalization to help support the changes they are trying to live when they return to their community.

Britney would recommend that today’s Justice majors learn Microsoft Excel, and take courses in counseling skills and  any sort of mental health and substance abuse topics. When she is away from work, spending time playing in the Alaska outdoors with her husband and two children is her favorite thing to do.

President Obama declared October as National Youth Justice Awareness Month. Read the full proclamation which calls for "rededicat[ing] ourselves to preventing youth from entering the juvenile and criminal justice systems and recommit to building a country where all our daughters and sons can grow, flourish, and take our Nation to new and greater heights."

The U.S. Dept. of Justice, Office of Juvenile Justice and Delinquency Prevention (OJJDP) notes on its website: "This month-long observance is dedicated to preventing youth from entering the juvenile and criminal justice systems and encourages communities to participate in activities and programs that help youth fulfill their greatest potential. The proclamation supports OJJDP's Smart on Juvenile Justice initiative to promote juvenile justice reform and address racial and ethnic disparities in the juvenile justice system."

Save the date - October 21! The 8th Annual Women in Law Enforcement Recruitment Fair at the UAA Student Union 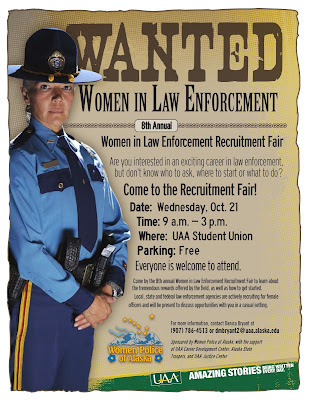 Are you interested in an exciting career in law enforcement,  but don’t know who to ask, where to start or what to do?

Come to the Recruitment Fair!

The Justice Center joined 19 law schools at the Law School Fair on September 17 at the UAA Student Union.

Representatives from the following law schools and organizations were in attendance to answer questions about  programs, admissions, and a career in law:
Law schools:

Prof. Jason Brandeis, J.D., Legal Studies faculty in the Justice Center, published an article in the recent issue of the Alaska Bar Rag, the official publication of the Alaska Bar Association. Prof. Brandeis discusses the current status of marijuana legalization in Alaska, including enforcement issues and criminal investigations reported in the media, analysis of the state's approach to marijuana legalization under the current federal guidance, and the ongoing development of Alaska's regulatory system. 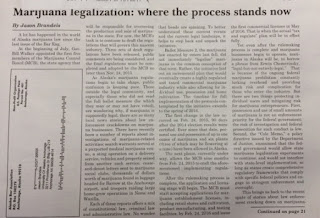 Dr. Troy Payne, Justice faculty, and a member of the Anchorage Community Police Relations Task Force (ACPRTF), joined other ACPRTF members at the September 22 reauthorization ceremony for the task force. The event was held in Mayor Ethan Berkowitz's office.

Since its establishment in 1981, the task force has operated successfully in its role as a liaison between the ethnic minority community and the Anchorage Police Department (APD).  It continues to provide a forum for input and constructive dialogue between Anchorage community members and the APD.

In 2010 we began a project to interview Justice alums who were working for the Alaska Division of Juvenile Justice (DJJ) at McLaughlin Youth Center in Anchorage, with the goal of posting a mini-profile on each individual on our Justice Center website.

We posted one profile, then other projects and deadlines intervened. But we are taking another look at this project and will be posting mini-profiles of these Justice alums over the next several weeks. This week we highlight alum Michael Heyward.

Michael Heyward, BA Justice '99, is a Juvenile Probation Officer II with DJJ Anchorage Probation and works at McLaughlin Youth Center (MYC). For Michael, the best part of the job involves being part of the process of helping kids and interacting with families. He works with kids who are residents for extended time periods and there are different dynamics among these kids. His biggest challenge is developing individual education plans (IEPs) for each kid – partly because family dynamics vary so much. Beyond that, there is always the issue of limited resources and options.

While a student at UAA, Michael did a project at MYC for a juvenile justice class – the McLaughlin staff person really liked his work and encouraged him to apply at MYC – and Michael did. Michael enjoys anything out of doors, and back in 2010 he especially liked camping and fishing with his kids – both of whom are now grown. He still likes to get out with his kids when they are home.
Posted by Barbara Armstrong at 10/08/2015 03:19:00 PM

Dr. Marny Rivera, Justice Center faculty, is part of a group of UAA researchers led by the Center for Human Development working on a youth behavioral health needs assessment for Anchorage. This project is under the auspices of the Anchorage Collaborative Coalitions.

This spring, the UAA collaborative research team presented the results of the examination of secondary data on behavioral health needs of youth and young adults in Anchorage at a community forum.The team includes researchers from the Center for Human Development, the Justice Center, the Center for Behavioral Health Research and Services, and the Department of Health Sciences

In this next phase, the research team will be working with coalition members to recruit up to 80 youth ages 12-24 years to participate in focus groups. The focus groups will explore youth perspectives on bullying, loneliness, sadness, and hopelessness. The primary data collected from the focus groups will fill identified data gaps.

The Anchorage Collaborative Coalitions will use focus group data to inform the design of a community-based intervention for interrupting youth suicide, determining mental illness risk factors, and fostering well-being, as well as resiliency.


Justice Alumni Chapter members attended the 2015 Green and Gold Gala held September 26 to raise funds for student scholarships. The event raised $72,000 in donations and pledges, and additional pledges and matches are still being processed.

Yale Metzger (BA Justice '87 ) bid on and won "Breakfast with the Chancellor" during the fundraising auction.

Membership in the chapter is open to all Justice and Legal Studies alums.  To join, contact Beth Mader, president.
Posted by Barbara Armstrong at 10/07/2015 03:00:00 PM

Justice Center faculty and staff were recently recognized by UAA for their years of service:


Our vision: Leading Alaska toward a safer, healthier, and more just society.