Need to break the silence continues beyond April

Justice Club wraps up "Breaking the Silence" event during April, Sexual Assault Awareness Month. Every Tuesday and Thursday in April, club members  provided an opportunity for people to share their words or story to raise awareness and break the silence about sexual assault.

Alpha Phi Sigma recognizes academic excellence of undergraduate and graduate students of criminal justice as well as juris doctorate students. Alpha Phi Sigma is the only Criminal Justice Honor Society which is a certified member of the Association of College Honor Societies and affiliated with the Academy of Criminal Justice Sciences.
Posted by Pamela Cravez at 4/26/2017 09:27:00 AM

Corrections aiming to be gold standard in treatment of mentally ill

The Department of Corrections (DOC) is the largest provider of mental health services in the state of Alaska. With 33,000 bookings a year, 65% of those booked qualify as beneficiaries of the Alaska Mental Health Trust Authority, including 23% with a serious mental illness, according to Adam Rutherford, Chief Mental Health Officer for DOC.

In many areas, Alaska lags behind other states, but not in its treatment of the mentally ill in its correctional institutions, Rutherford said.“We are practicing evidenced-based interventions, we are a leader in this area,” he said, adding, “We want to be the gold standard in mental health care.”

Rutherford, along with Laura Brooks, Director of Health and Rehabilitation Services for DOC, Shannon Cross-Azbill, Clinical Director for the Division of Juvenile Justice (DJJ) and Heidi Redick, DJJ Chief Probation Officer, spoke at UAA earlier this month in a program sponsored by the UAA Justice Club on how the mentally ill are being served in both the adult corrections and juvenile justice.

While it is often difficult to diagnose juveniles, DJJ Clinical Director Cross-Azbill said that the majority of those in DJJ have a mental health diagnosis including substance abuse, ADHD, depression and trauma-related disorders. They’ve recently been keeping track of Fetal Alcohol Syndrome Disorders and found 47% of the juveniles may be experiencing this, she added.

The panelists attributed the high numbers of those with a mental illness in both juvenile and adult systems to be partly in response to a lack of resources outside their systems.

Laura Brooks, who oversees all of DOC’s Health and Rehabilitative Services (HARS), explained the growth in prison treatment of the mentally ill as symptomatic of a shift in the 1960s away from funding state psychiatric hospitals and moving toward community mental health centers that were inadequately funded. Eventually, many of those with mental health issues ended up in correctional institutions, she said.

Not only is DOC Alaska’s largest behavioral treatment center it is also the state’s largest health care provider.  It is also the largest medical facility, largest detox center, and substance abuse treatment center. The behavioral health staff has 21,000 contacts with offenders a year, according to Rutherford. The HARS staff of 200 sees 5,000 patients a day inpatient and 4,000 a day outpatient, according to Brooks.

DOC has followed the national movement to screen people coming into the system to assess : 1) criminogenic risk, 2) need for substance abuse treatment, and 3) need for mental health treatment.

The goal is to have people in a better position when they leave the facilities than when they entered, Rutherford said. This is important, he added, because most of those who are incarcerated return to the community.
Posted by Pamela Cravez at 4/24/2017 01:16:00 PM

ACLU of Alaska's Legal and Policy Director Tara Rich spoke to Prof. Jason Brandeis' Civil Liberties class (JUST/LEGL A443). Rich gave a presentation on the ACLU's nationwide Campaign For Smart Justice and engaged the class in a discussion of criminal justice issues in Alaska. At the end of the class, Rich distributed pocket-sized constitutions to all of the students.
Posted by Pamela Cravez at 4/21/2017 12:11:00 PM

The 2016 University of Alaska Campus Climate Survey, conducted by Dr. Lindsey Blumenstein, Justice faculty, found that few University of Alaska students who experienced sexual violence chose to disclose their victimization to authorities or a sexual assault advocate. The results of the campus climate survey, in combination with efforts of many across UAA to provide better victim services, led to a partnership with STAR and the opening of the Center for Advocacy, Relationships, and Sexual Violence, on UAA's campus. The Justice Center encourages you to attend the ceremony marking the opening on Friday, April 21, in Rasmuson Hall 118.
Posted by Pamela Cravez at 4/19/2017 01:28:00 PM

Prof. Jason Brandeis, Justice faculty, is giving two presentations at a day-long continuing legal education course for members of the Alaska Bar Association focused on marijuana law in Alaska on April 20 at the Dena'ina Civic and Convention Center.

Prof. Brandeis will present on legal developments in federal and state marijuana laws, providing an historical overview and discussion of pertinent state/federal conflicts. He will also do a presentation on ethics in marijuana law.

Prof. Brandeis teaches courses on the American legal system, constitutional law, and civil liberties, and is a frequent speaker on constitutional law and other legal topics.  Prof. Brandeis also maintains a private law practice through which he advises clients on marijuana law and policy questions.  He has also provided legal services to the Campaign to Regulate Marijuana Like Alcohol in Alaska

Sen. Dan Sullivan thanks Dr. Blumenstein for highlighting "critical issue for our State"

Want to learn more about justice in Anchorage?

"If you want to really learn about what happens behind the scenes — to a certain extent — in regards to Anchorage and what really happens to the justice side of it, the [Justice] club is in a perfect spot right now to where you can learn about that,” Brad Foster, club president and criminal justice major told the Northern Light.

Justice Club's emphasis on service and its effort to strengthen year-to-year student involvement is driving a merger with the Pre-Law Society. "Pre-Law Society is actually going to be dissolving into the Justice Club, and the new club is going to be called the Society of Law and Justice," Foster said.

Interested in learning more: check out the end of year Mario Kart Drive for Justice bash April 21 at 6p.m. in North Hall 2nd floor lounge. Or go to a meeting. The club meets every other Friday at 5:30p.m. in room 119 of the Social Science Building. The next meeting is April 14. Questions? uaa_justiceclub@alaska.edu
Posted by Pamela Cravez at 4/14/2017 02:36:00 PM

Dr. Allan Barnes, Justice faculty, spoke to members of Anchorage Gateway Rotary about the community's increased concern about crime.  He provided  copies of the AJSAC "Fact Sheet" on recent violent crime trends and other relevant AJSAC information.  He also demonstrated how to use the Anchorage Police Departments new Community Crime Map program and gave them information for creating a Neighborhood Crime Watch program in their home area.  A lively discussion of the causes for the perceived increase in violent crime in Anchorage ensued.
Posted by Pamela Cravez at 4/11/2017 02:22:00 PM 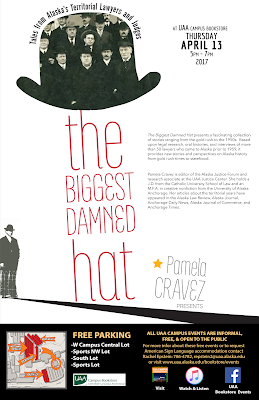 The Biggest Damned Hat presents a fascinating collection of stories ranging from the gold rush to the 1950s.  Based upon legal research, oral histories, and interviews of more than 50 lawyers who came to Alaska prior to 1959, it provides new stories and perspectives on Alaska history from gold rush times to statehood.  It is published by University of Alaska Press.

Students in Prof. Ryan Fortson's Trial and Advanced Litigation Processes class recently participated in a mock trial. Students performed all elements of the civil wrongful death trial, including opening and closing statements, examination of witnesses, laying the foundation for expert witnesses, and making objections. Prof. Kristin Knudsen, Legal Studies faculty who has spent more than eight years as an administrative law judge, served as judge for the trial. Judge Knudsen found mostly for the defense, although did find for the plaintiff on a couple of points.
Posted by Pamela Cravez at 4/06/2017 12:31:00 PM

More than half of  adult women in the state of Alaska have experienced intimate partner violence, sexual violence or both, Dr. André Rosay, director of the Justice Center, said in an interview with Ammon Swenson for the Anchorage Press.  The findings are from the 2015 Alaska Victimization Survey, for which Dr. Rosay is principal investigator. 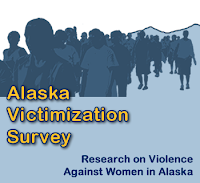 Results of the  2015 survey showed consistently high rates throughout Alaska, according to Dr. Rosay. He added, that even though rates are very high, results from the 2010 Victimization Survey were even higher.

"We're moving in the right direction, but we have a very, very long way to go," Dr. Rosay said.  People recognize the problem and prevention programs are increasing, he said.  "We've turned a curve and proven we can make a difference."

Still, he's concerned that budget cuts are beginning to make the emphasis on domestic violence go away.

The Justice Center conducts the Alaska Victimization Survey for the Council on Domestic Violence and Sexual Assault (CDVSA).

The Alaska Dispatch News recently interviewed Professor Troy Payne,  Justice faculty, regarding  four officer-involved shootings in the last nine months in Mat-Su. Payne is author of what the Dispatch called a “pivotal 2013 report” of Anchorage police shootings over a 20-year period.

The role of K-9s in two of the four officer-involved shootings highlights the importance of studying how police and citizens interact, Payne said. Dogs can terrify a fleeing suspect, who might choose to shoot. Agencies should review each incident carefully to make sure policy and practice is meeting the agency’s goals.

Regarding the most recent incident, he added ,"Clearly you had a citizen there who was willing to shoot somebody."

Alternative or therapeutic courts are probably one of the biggest movements in the judiciary since the Judiciary Act of 1789, Assistant Professor Cory Lepage, Justice faculty, told a nearly standing room only audience at a panel discussion on alternative courts last week in the Lew Haines Conference Room at the UAA/APU Consortium Library.

The non-adversarial courts bring prosecutor, defense attorney, judge, probation officer and defendant together to craft a set of requirements that often include intense outpatient treatment, random UAs, getting a job or doing volunteer work, and regular updates to the court for 12 to 18 months.

"It’s a lot easier to sit on your butt in jail,” Assistant D.A. Heather Nobrega said.

The non-adversarial approach takes some getting used to, according to Assistant P. D. Ben Muse. “Heather and I are trial lawyers, people don’t always play nice.”


“We have different perspectives,” Nobrega said, adding, “The judge makes the ultimate decision.”

Both agree, though, on the success of the court and its ability to support defendants and helping to keep them from re-offending.

Judge Deborah  Smith presides over the Alaska Hope Court – a pilot project at the federal level.  Probation Officer Chris Liedike, a reentry specialist, works with defendants in the program.

It’s a carrot and stick approach with immediate and proportional sanctions, Judge Smith said. A positive UA results in immediate jail time, two days if the defendant is truthful, four days if not truthful.

Judge Smith invited audience members to visit her court, which is in session every other Thursday in courtroom 4 in the federal building. “It’s open to the public,” she said. “Feel free to come and join us or intern with us.”
Posted by Pamela Cravez at 4/05/2017 08:31:00 AM 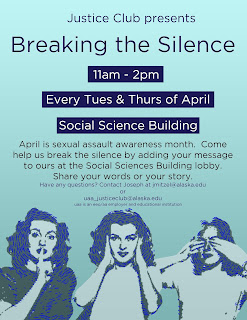 Governor Bill Walker proclaimed April Sexual Awareness Month citing the 2015 Alaska Victimization Survey  which presents research on violence against women in Alaska. Although Alaska experienced a decrease in sexual violence in the past 12 months, the state is still ranked highest in the nation.

To support increased awareness, the UAA Justice Club presents, "Breaking the Silence." Share your words or story and help break the silence every Tuesday and Thursday in April from 11a.m.-2p.m. in the Social Science Building.

Sexual Awareness Month is observed on the national level as well as state level.