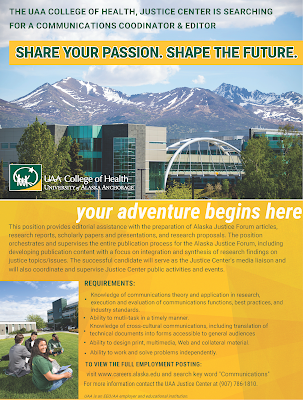 The UAA Justice Center is seeking a Communications Coodinator & Editor.
This position provides editorial assistance with the preparation of Alaska Justice Forum articles, research reports, scholarly papers and presentations, and research proposals. The position orchestrates and supervises the entire publication process for the Alaska Justice Forum, including developing publication content with a focus on integration and synthesis of research findings on justice topics/issues. The successful candidate will serve as the Justice Center's media liaison and will also coordinate and supervise Justice Center public activities and events.

See the full job posting at the Careers at UAA website.

The program focused on UAA Justice Center's research mission, with a particular emphasis on research being undertaken by Dr. Johnson to support the Alaska Department of Public Safety's sexual assault kit initiative (SAKI), which is focused on improving the Alaska State Troopers' and partner agencies' responses to sexual assault.

Additional resources are available on the Alaska Public Media website, where the full program can also be heard: 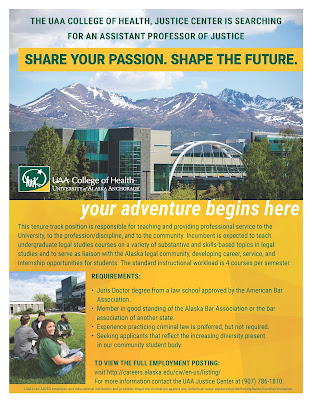 This tenure-track position is responsible for teaching and providing professional service to the  University, to the profession/discipline, and to the community. Incumbent is expected to teach  undergraduate legal studies courses on a variety of substantive and skills-based topics in legal studies and to serve as liaison with the Alaska legal community, developing career, service, and  internship opportunities for students. The standard instructional workload is 4 courses per semester.

Requirements:
See the full job posting at the Careers at UAA website. 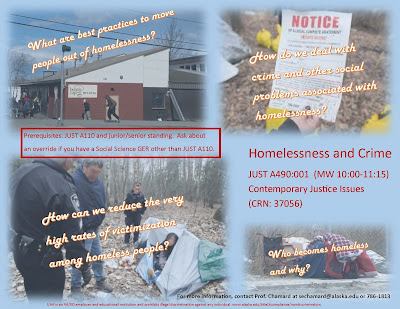 What are best practices to move people out of homelessness? How do we deal with crime and other social problems associated with homelessness? How can we reduce the very high rates of victimization among homeless people? Who becomes homeless and why?


For more information, contact Prof. Sharon Chamard at sechamard@alaska.edu or 786-1813.

Registration for Spring 2019 courses begins on November 12 for seniors and November 13 for juniors. 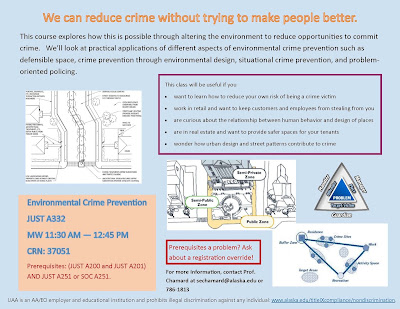 This class will be useful if you


Prerequisites a problem? Ask about a registration override!

For more information, contact Prof. Sharon Chamard at sechamard@alaska.edu or 786-1813. 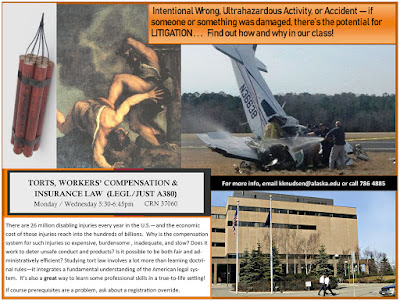 There are 26 million disabling injuries every year in the U.S.—and the economic cost of those injuries reach into the hundreds of billions. Why is the compensation system for such injuries so expensive, burdensome, inadequate, and slow? Does it work to deter unsafe conduct and products? Is it possible to be both fair and administratively efficient? Torts, Worker’s Compensation, & Insurance Law (LEGL/JUST A380) will examine these questions.

This Spring 2019 elective will be held Mondays and Wednesdays from 5:30 to 6:45 PM.
If course prerequisites are a problem, ask about a registration override.

For more info, contact Prof. Kristin Knudsen at kknudsen@alaska.edu or 786-4885. 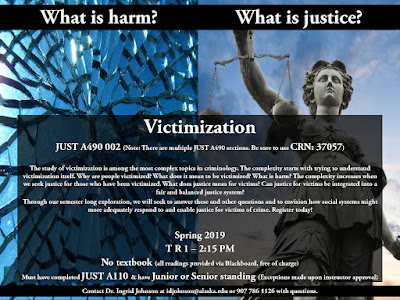 The study of victimization is among the most complex topics in criminology. The complexity starts with trying to understand victimization itself. Why are people victimized? What does it mean to be victimized? What is harm? The complexity increases when we seek justice for those who have been victimized. What does justice mean for victims? Can justice for victims be integrated into a fair and balanced justice system?

Through our semester-long exploration in Victimization (JUSTA490-002), we will seek to answer these and other questions and to envision how social systems might more adequately respond to and enable justice for victims of crime.

This Spring 2019 elective course will be held Tuesdays and Thursdays from 1:00 to 2:15 PM. There will be no textbook — all readings will be provided via Blackboard, free of charge.

Course on Probation, Parole and Community Corrections (JUST A445) explores supervision of offenders in the community 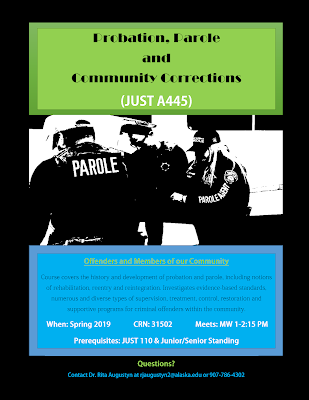 Probation, Parole and Community Corrections (JUST A445) will examine how the system of probation and parole developed, practices and methods of supervision of probationers and parolees, and programs for the reentry and reintegration of offenders into the community. 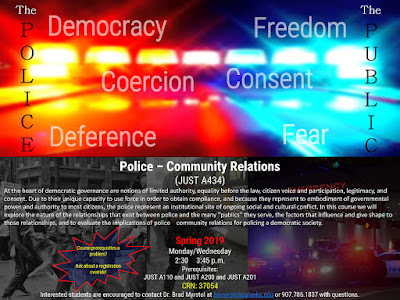 At the heart of democratic governance are notions of limited authority, equality before the law, citizen voice and participation, legitimacy, and consent. Due to their unique capacity to use force in order to obtain compliance, and because they represent to embodiment of governmental power and authority to most citizens, the police represent an institutional site of ongoing social and cultural conflict.

In Police–Community Relations (JUST A434), we will explore the nature of the relationships that exist between police and the many “publics” they serve, the factors that influence and give shape to those relationships, and to evaluate the implications of police – community relations for policing a democratic society.


Course prerequisites a problem? Ask about a registration override! 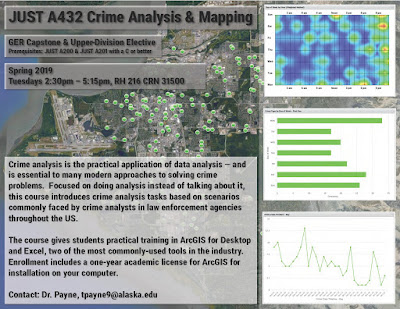 Crime analysis is the practical application of data analysis — and is essential to many modern approaches to solving crime problems. Focused on doing analysis instead of talking about it, Crime Analysis & Mapping (JUST A432), introduces crime analysis tasks based on scenarios commonly faced by crime analysts in law enforcement agencies throughout the US.

The course gives students practical training in ArcGIS for Desktop and Excel, two of the most commonly-used tools in the industry. Enrollment includes a one-year academic license for ArcGIS for installation on your computer.

The Courts (JUST A374) course examines the impact of courts on law, society, and politics 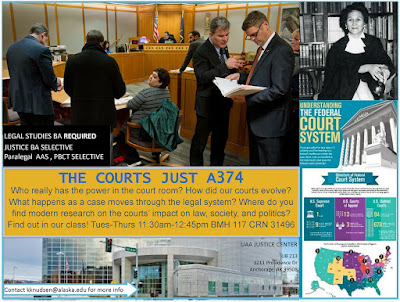 Who really has the power in the court room? How did our courts evolve? What happens as a case moves through the legal system? Where do you find modern research on the courts’ impact on law, society, and politics?

For more info, contact Prof. Kristin Knudsen at kknudsen@alaska.edu or 786-4885. 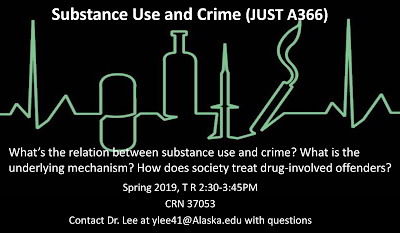 What’s the relation between substance use and crime? What is the underlying mechanism? How does society treat drug-involved offenders?

Find out in the Spring 2019 course Substance Abuse and Crime (JUST A366). This elective course will be held Tuesdays and Thursdays from 2:30 to 3:45 PM.
Contact Dr. Yeungjeom Lee at ylee41@alaska.edu with questions. 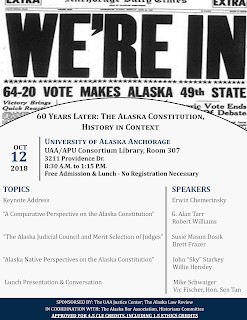 "60 Years Later: The Alaska Constitution, History in Context" drew over 75 attendees on October 12 at the UAA/APU Consortium Library.

The Alaska Law Review will be publishing an issue at a later date with articles prepared for the symposium. The Alaska Law Review is published by Duke University School of Law for the Alaska Bar Association. Meantime, symposium drafts of conference papers and videos of all sessions are available for download at the UAA Justice Center website.